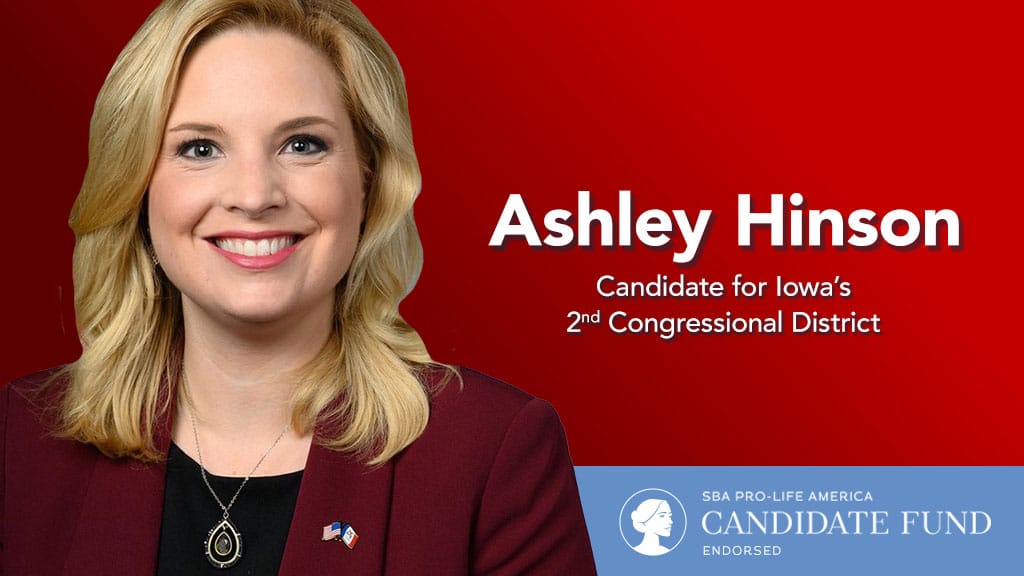 Rep. Hinson is the first woman to represent Iowa’s 67th District in the state House of Representatives. A former award-winning news reporter in Cedar Rapids, Hinson has been in tune to the lives of Iowa families for over a decade. She is dedicated to providing Iowans with opportunities and resources to choose life. Ashley resides in Marion with her husband Matt and their two boys.

In Congress, Congresswoman Hinson has earned an A+ on SBA Pro-Life America's National Pro-Life Scorecard. She has stood up against the pro-abortion agenda of the Biden-Harris administration and Pelosi Democrats who are actively working to expand abortion access and abortion funding. Rep. Hinson has voted consistently to defend the lives of the unborn and infants. This includes stopping hard-earned tax dollars from paying for abortion, whether domestically or internationally, and protecting health care provider rights for those who refuse to engage in brutal abortions.

Congresswoman Hinson offered three important pro-life amendments to spending bills. The first would restore Kemp-Kasten Amendment, giving the president authority to discontinue funding for organizations that support or participate in coercive abortion programs overseas; the second would restore the longstanding Smith Amendment that restricts taxpayer funding for elective abortion for federal employees; the third would restore the longstanding Dornan Amendment that prohibits taxpayer funding for elective abortion in Washington, D.C. Rep. Hinson also offered a unanimous consent request for consideration of H.R. 18, the No Taxpayer Funding for Abortion and Abortion Insurance Full Disclosure Act, which would make the Hyde Amendment permanent. She sent a letter along with all GOP appropriators to Appropriations Chair Rosa DeLauro saying they would oppose all attempts to remove the Hyde Amendment or any Hyde-type policies from appropriations bills.