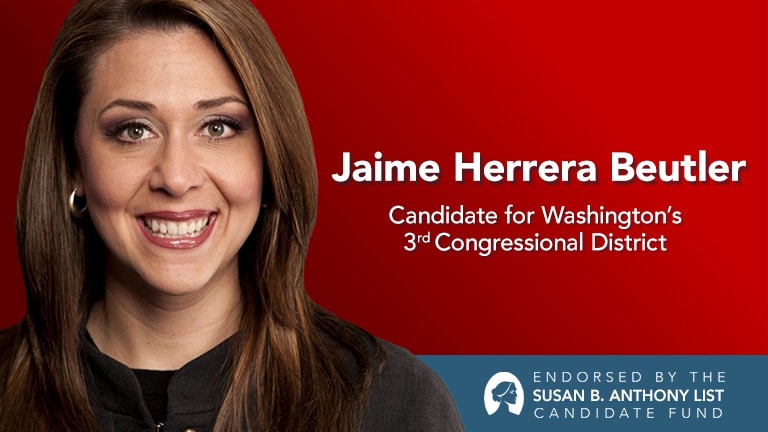 Herrera Beutler previously served in the Washington State legislature from 2007 to 2010 and worked in the office of U.S. Rep. Cathy McMorris Rodgers (R-WA-05). She and her husband Daniel have three children and live in Battle Ground. Abigail, now 8, was diagnosed with Potter’s Syndrome at 20 weeks in the womb. Born without kidneys, she was not expected to survive, but then-experimental treatment saved her life.

Herrera Beutler has earned an A+ on SBA List’s National Pro-Life Scorecard and has maintained a longtime 100% pro-life voting record. As a senior member of the House Appropriations Committee, she has been a leading advocate for preserving the Hyde Amendment and stopping the expansion of taxpayer-funded abortion on demand. Herrera Beutler founded the congressional Maternity Care Caucus. She is a co-sponsor of the No Taxpayer Funding for Abortion and Abortion Full Disclosure Act, the Pain-Capable Unborn Child Protection Act, and the Support and Value Expectant Moms and Babies Act. She signed the pro-life congressional amicus brief in Dobbs v. Jackson Women’s Health Organization, in which the Court will assess whether pre-viability limits on abortion are constitutional.