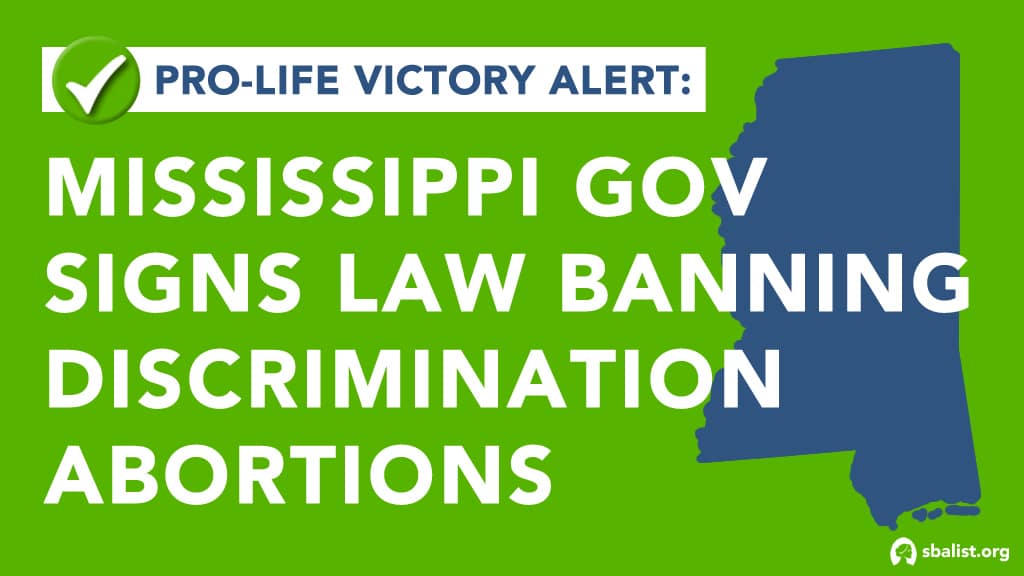 Historic Legislation Protects Unborn Children from Abortion on the Basis of Sex, Race, or Genetic Makeup

Jackson, MS. –  The national pro-life group Susan B. Anthony List (SBA List) today celebrated as Mississippi Governor Tate Reeves signed the Life Equality Act, legislation to stop the practice of discrimination abortions carried out because of a child’s race, sex, disability, or genetic makeup, into law. The bill passed by overwhelming margins in the state legislature.

“The enactment of the Life Equality Act is an historic victory for the pro-life citizens of Mississippi, for the voiceless victims of discrimination and all who advocate for them,” said SBA List State Policy Director Sue Liebel.  “Starting now, unborn babies in Mississippi cannot be targeted for abortion based on their sex, race, or potential disability, such as Down syndrome. Such lethal discrimination, whether inside or outside the womb, should be unacceptable anywhere in our society.

Mika Hartman and her son Hudson, who has Down syndrome, recently met with Mississippi legislators to advocate for the Life Equality Act. Mika and her husband chose life for Hudson after being encouraged to abort her son due to his disability. Today Hudson is a happy, healthy toddler.

Polling conducted early this year found that 65% of Americans, including 50% of those who identify as “pro-choice,” oppose discrimination abortion carried out because a baby has Down syndrome.