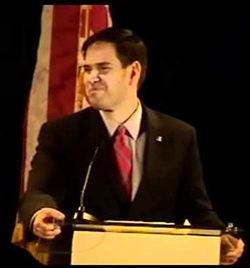 oday is the 34th anniversary of China’s coercive one-child policy. Sen. Marco Rubio (R-FL) wrote an op-ed in Townhall.com decrying this terrible human rights abuse that leads to millions of abortions, mostly of baby girls. Rubio is one of 11 potential presidential candidates who supports limiting abortion at 5 months of pregnancy, when a baby can feel the excruciating pain of abortion.

…For over three decades, China’s One-Child Policy has condemned approximately 37 million Chinese girls – who the policy helped deem unwanted or “surplus” – to abortion, infanticide, abandonment and human trafficking. In recent years, the Chinese government has relaxed this disastrous policy and ironically, China now faces demographic decline in the coming decades, in part due to the One-Child Policy. However, innocent Chinese parents are still forced to endure abortions and sterilizations in the parts of the country that are still subject to it.

There have also been additional long-term consequences of China’s One-Child Policy that we see today, including one that I am actively trying to address through legislation I’ve introduced called the Girls Count Act…