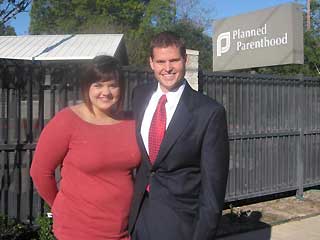 Today, millions of Americans are heading to the polls to defend life by casting a ballot. But the pro-life movement won big in a different way in Texas, where a Planned Parenthood director quit after watching an abortion procedure on an ultrasound. Fox News reports:

Abby Johnson says she knew it was time to leave after she watched a fetus “crumple” as it was vacuumed out of a patient’s uterus in September.

‘When I was working at Planned Parenthood I was extremely pro-choice,” Johnson told FoxNews.com. But after seeing the internal workings of the procedure for the first time on an ultrasound monitor, “I would say there was a definite conversion in my heart … a spiritual conversion.”

Without a doctor in residence, she said, her clinic offered abortions only two days a month, but the doctor could perform 30 to 40 procedures on each day he was there. Johnson estimated that each abortion could net the branch about $350, adding up to more than $10,000 a month.

$10,000 a month is a huge stream of revenue, and that’s just at one location. Lump that cash in with the other Planned Parenthood clinics around the country and you’ve got an organization bringing in over $1 billion dollars. Lost on why Congress is still giving Planned Parenthood hundreds of millions in taxpayer dollars each year? So are we.