In September 2016, then-candidate Donald J. Trump sent a letter to pro-life leaders outlining four commitments to the pro-life movement. The promises were not only important to securing pro-life voters, but they also had and continue to have appeal to the majority of Americans who oppose the Democratic party’s extreme platform that supports taxpayer funding of abortion on-demand, even late-term abortion up until the moment of birth.

In his letter, President Trump committed to:

As will be outlined in this report, President Trump has governed as a pro-life president during his first 100 days in office, quickly making good on one of his four major commitments as well as demonstrating pro-life leadership in other areas. Actions taken: 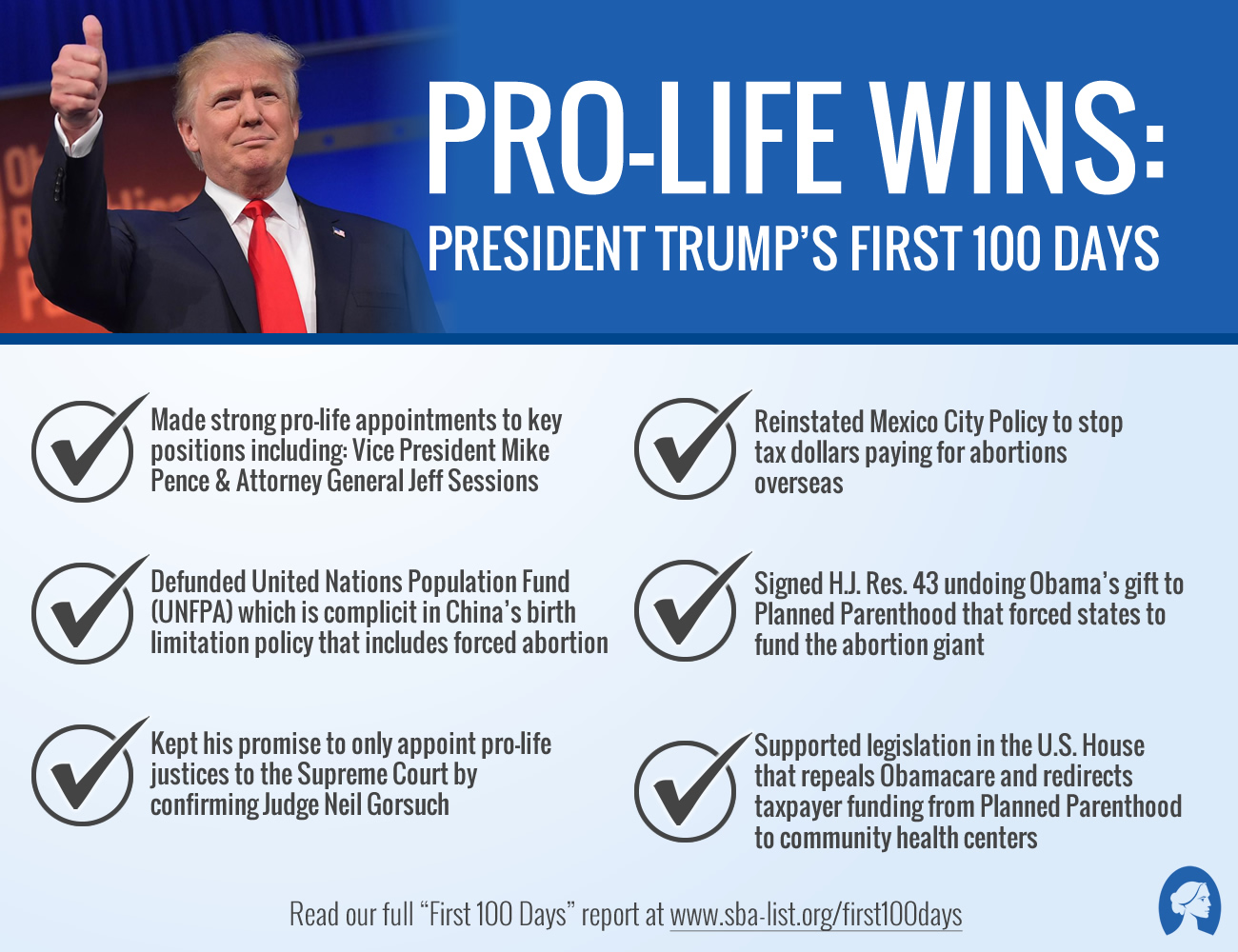 We trust that President Trump will continue to side with life and push for pro-life victories throughout the duration of his presidency.

Mike Pence
Donald Trump’s selection of then-Gov. Mike Pence as his running mate was an affirmation of his pro-life position. Pence has been a pro-life champion throughout his public service. He led the effort to defund Planned Parenthood in Congress, and, as Governor, signed into law a historic bill protecting unborn children from lethal discrimination in the womb. On January 27, 2017, Vice President Mike Pence became the first sitting Vice President to address the March for Life in person.

Jeff Sessions
Jeff Sessions is a principled pro-life advocate who brings a lifetime of experience to the office of Attorney General. While serving in the Senate, Jeff Sessions held a 100 percent pro-life voting record and was a co-sponsor of the Pain-Capable Unborn Child Protection Act. We trust Attorney General Sessions to defend the constitutional right to life of every American, including the unborn, and set the tone for the entire department which, for eight years under former President Obama, ignored the misdeeds of the abortion industry.

Tom Price
Tom Price had a 100 percent pro-life record while serving in Congress and is well positioned to champion pro-life health care as the new Secretary of HHS. Price helped lead the charge to defund Planned Parenthood through budget reconciliation, setting the stage for the President and Congress to reallocate that taxpayer funding to support comprehensive women’s healthcare. As HHS Secretary, he plays a key role in developing a robust health care reform proposal that protects life and consciences, while promoting options for low-income individuals and families.
Kellyanne Conway
Kellyanne Conway is a trustworthy, longtime friend of the pro-life movement. No one is better at understanding what real people are thinking and how to connect with them than Kellyanne. She understands the importance of effectively communicating the pro-life position and leveraging the passion of the pro-life grassroots for political and legislative victories. We are incredibly proud of her achievements in the 2016 election and encouraged that she remains in Washington as the Counselor to the President.

At the start of his presidency, President Donald Trump issued an Executive Memorandum to reinstate the Mexico City Policy which stops U.S. taxpayer funding of the abortion industry overseas. The Mexico City Policy does not reduce foreign assistance, rather it ensures that U.S. international aid partners act consistently to save lives, rather than promoting and performing abortion.

This swift action continues Ronald Reagan’s legacy by stopping the promotion of abortion through our tax dollars overseas. His action to promote respect for all human life, including vulnerable unborn children abroad, as well as conscience rights, sent a strong signal early on about his Administration’s pro-life priorities. Not only did President Trump reinstate the Mexico City Policy, he modernized it by applying it to all foreign health assistance programs.

For nearly a decade under President Obama, American taxpayers funded UNFPA, which has a long history of involvement in China’s brutal birth limitation policy – enforcement of which routinely includes the atrocity of forced abortions.

That changed on April 4, 2017, when President Trump invoked the Kemp-Kasten Amendment to cut off U.S. taxpayer funding of the UNFPA. The Kemp-Kasten Amendment gives the President the authority to determine whether an organization should be de-funded because it “supports or participates in the management of a program of coercive abortion or involuntary sterilization.”

In 1999, UNFPA representative Sven Burmester said, “China has had the most successful family planning policy in the history of mankind in terms of quantity and with that, China has done mankind a favor.” UNFPA’s current China program continues to support the Chinese government’s population control program.  Despite China’s continued sustained human rights abuses in the form of this coercive birth limitation policy, UNFPA continues to partner with the very agency that enforces the policy, the National Health and Family Planning Commission (NHFPC).

China recently announced a two-child policy, billed as a loosening of the one-child policy.  However, both the State Department and the Congressional-Executive Commission on China document continued oppressive coercion including steep fines for unpermitted births and coerced abortion.  Per the Congressional-Executive Commission on China, “[o]fficials continue to enforce compliance with population planning targets using methods including heavy fines, job termination, arbitrary detention, and coerced abortion.”

Rather than fund these human rights abuses, the money will now be made available for maternal health and other initiatives.

The resolution signed by President Trump simply ensures that states are not forced to fund an abortion business with taxpayer dollars. Rather, states have the option to spend Title X money on comprehensive health care clinics that better serve women and girls. It was a woman-led effort in Congress to get this bill on the President’s desk. Rep. Diane Black and Sen. Joni Ernst sponsored the resolution. Because this was done through the Congressional Review Act, the regulation cannot be reinstated by any future president. Never again will a pro-abortion president be able to force states to fund Planned Parenthood through Title X.

In nominating Neil Gorsuch, President Trump kept his promise to nominate only pro-life judges to the Supreme Court. Justice Gorsuch is a distinguished jurist with a strong record of protecting life and religious liberty.

As a judge on the Tenth Circuit Court of Appeals, Gorsuch forcefully dissented from a case in which the Tenth Circuit sided with Planned Parenthood, refusing to allow the Governor of Utah to defund the abortion business in wake of videos showing its involvement in the selling of fetal organs. Gorsuch decided in favor of the plaintiffs Hobby Lobby and the Little Sisters of the Poor in their First Amendment lawsuits against the arbitrary conscience infringements wrought by Obamacare. He also wrote a book called “The Future of Assisted Suicide and Euthanasia” in which he argues that “human life is fundamentally and inherently valuable” and that “the intentional taking of human life by private persons is always wrong.”

The swift fulfillment of President Trump’s commitment to appoint pro-life Supreme Court justices was a tremendous win for the pro-life movement.

Since his first day in office, President Trump has been resolute in his efforts to repeal the pro-abortion Affordable Care Act through reconciliation. He has supported legislation in the U.S. House to repeal Obamacare which includes a provision to redirect Planned Parenthood’s taxpayer funding to community health centers.

At this time, the pro-life provisions are the least controversial element of the legislation, which remains blocked by congressional gridlock. The president is working with all factions in the Republican Party to get the bill back on track.