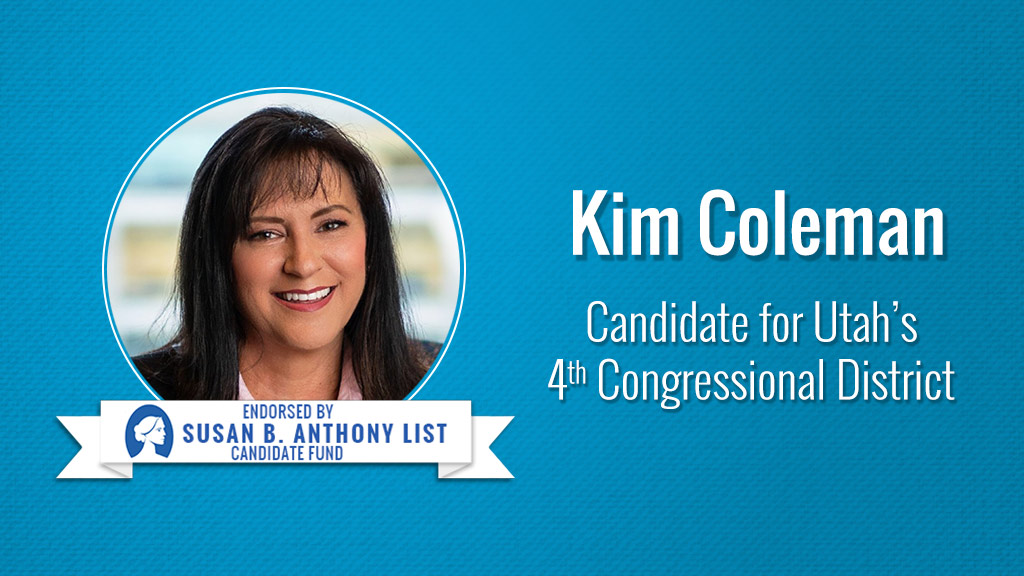 Washington, D.C. –  Today Susan B. Anthony List Candidate Fund announced its endorsement of State Representative Kim Coleman for Congress in Utah’s 4th District. The Republican state convention is this week and a primary election will be held on June 30, 2020.

“State Representative Kim Coleman exemplifies the strong pro-life, pro-woman leadership SBA List exists to promote,” said Marilyn Musgrave, SBA List Vice President of Government Affairs. “As a mother, educator, and lawmaker, Kim is a vocal advocate for the most vulnerable. During her time in the state legislature she has been a consistently outspoken and courageous voice for unborn babies and their mothers, proudly cosponsoring legislation signed by Governor Herbert that stops abortions after 18 weeks. She is a staunch supporter of legislation to stop lethal discrimination against unborn children with Down syndrome, informed consent protections for women, and many other pro-life priorities. Kim has the proven experience to hit the ground running and stand up to Nancy Pelosi and the radical abortion lobby in Washington. We are proud to endorse her and urge the pro-life voters of the 4th District to support her in her primary.”

Kim Coleman has served in the Utah House of Representatives since 2015 and is the founder and executive director of the Monticello Academy charter school. She has a 100% pro-life voting record and cosponsored the Cherish Act (H.B. 136). She and her husband Joel have five children and are members of the Church of Jesus Christ of the Latter-Day Saints.