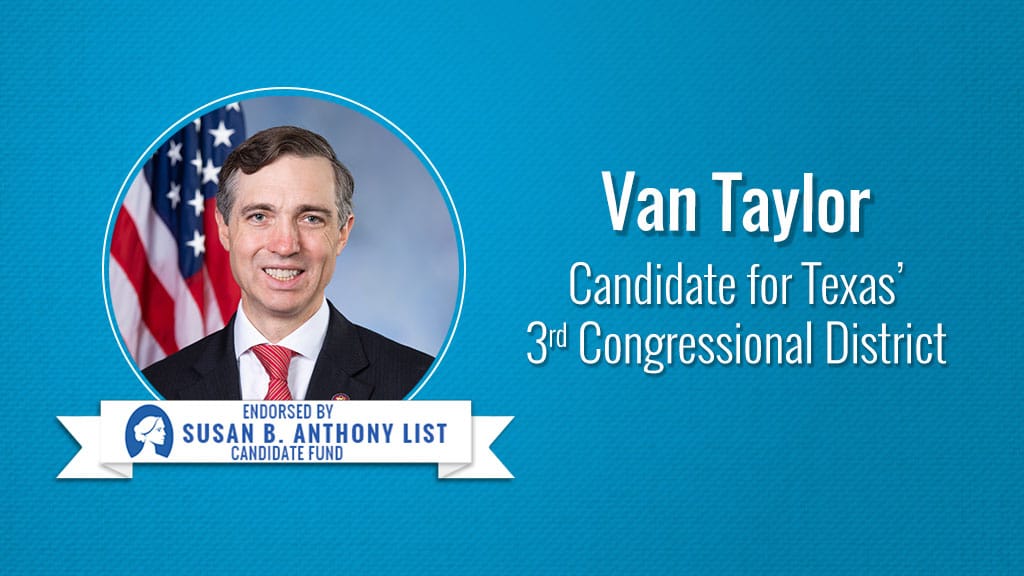 “Congressman Van Taylor is a champion of the vulnerable and we are proud to endorse him,” said the Honorable Marilyn Musgrave, vice president of government affairs. “Service defines Rep. Taylor’s career. As a Marine who experienced the 9-11 terrorist attack up close and led rescue missions overseas, he personally understands the importance of fighting on the side of life. That’s exactly what he has done in Washington, from working to end domestic violence and human trafficking to championing protections for unborn children and their mothers. As congressional Democrats push a radical agenda of abortion on demand through birth and even infanticide, paid for by taxpayers, Rep. Taylor advocates for the compassionate, common ground pro-life laws Texans want – like legislation to stop late-term abortions after five months of pregnancy. His opponent Lulu Seikaly is an extremist in the mold of Nancy Pelosi and the ‘Squad,’ and is out of step with Texas. We look forward to seeing Rep. Taylor re-elected so his important work can continue.”

Taylor was elected to Congress in 2018. His leadership on life throughout his first term is reflected in his “A” rating on SBA List’s National Pro-Life Scorecard. He is a co-sponsor of the Support and Value Expectant (SAVE) Moms and Babies Act, the No Taxpayer Funding for Abortion and Abortion Insurance Full Disclosure Act, and the Pain-Capable Unborn Child Protection Act.

Taylor previously served in the U.S. Marine Corps, earning numerous accolades for his service to his country. He also has extensive experience in the private sector, focusing his career on real estate finance and banking. He and his wife Anne are the proud parents of three girls and live in Plano, Texas.