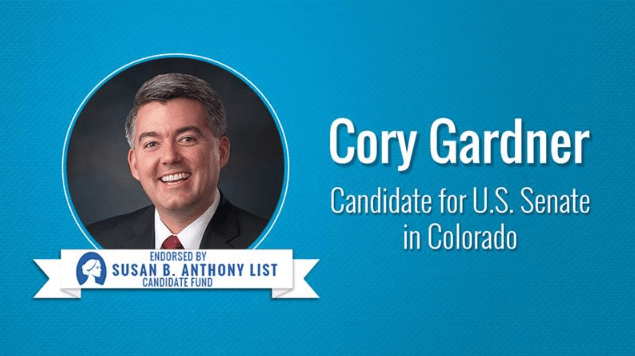 “We are proud to endorse Senator Cory Gardner, who has earned an ‘A’ rating on our scorecard thanks to his 100% pro-life voting record,” said the Honorable Marilyn Musgrave, SBA List’s Vice President of Government Affairs. “This year alone, Senator Gardner has cast votes in favor of limiting late-term abortions and protecting babies born alive after failed abortions. These are commonsense, compassionate pieces of legislation that the majority of Americans agree should be passed. Governor Hickenlooper is a pro-abortion extremist and is out of touch with the voters in his state. We are confident Colorado voters will reject Democratic abortion extremism and will vote to re-elect Senator Gardner.”

Cory Gardner has a 100% pro-life voting record, supporting the Pain-Capable Unborn Child Protection Act, the Born Alive Abortion Survivors Protection Act, and the No Taxpayer Funding for Abortion Act. He previously served in the U.S. House of Representatives from 2013-2015. Prior to serving in Congress, he worked as an attorney and legislative director for Senator Wayne Allard. He and his wife Jaime have three children.