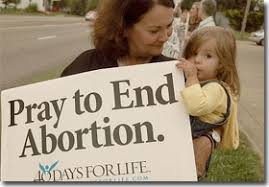 There have been a total of six nationally coordinated 40 Days for Life campaigns since 2007—and since then at least 3,352 lives have

been saved, 35 abortion clinic workers left their jobs, and 7 abortion facilities have been closed. During last year’s campaign, Abby Johnson, a former Planned Parenthood clinic manager, quit her job and went outside to hug a prayerful protester.

The 40 Days for Life campaign is active in all 50 states, and has even had international influence.  This was the first year campaigns have been organized in England, Denmark, Austria, Canada, and Northern Ireland—but not everyone is thrilled that this pro-life campaign has made its way overseas.

In some of these countries, abortion is a much more socially acceptable practice—in fact, throughout Britain, a fourth of all pregnancies end in abortion.  The U.K.’s Daily Mail reported that British pro-choice leaders fear the involvement of American pro-life groups such as 40 Days for Life because they are well organized and financed groups.

Darinka Aleksic, campaign coordinator at Abortion Rights, the pro-choice campaigning group, is ­hoping they don’t learn too much.  ‘We’re really alarmed at any involvement of American anti-choice groups in this country.  We’d like to keep the debate civilized and moderate.  ‘We don’t want the American situation replicated over here — where abortion providers fear for their lives and women have to walk through a barrage of abuse to ­exercise their legal rights.’