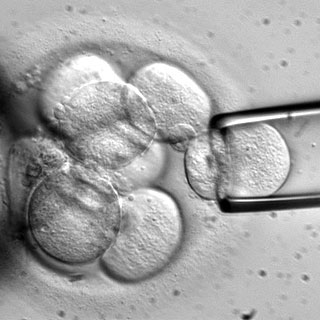 Its a miracle, and a huge win for proponents of adult stem cell use! The AP is reporting that in Italy, dozens of people who had been blinded as a result of chemical burns to their eyes had their sight restored after adult stem cell therapy. From the AP:

“The treatment worked completely in 82 of 107 eyes and partially in 14 others, with benefits lasting up to a decade so far. One man whose eyes were severely damaged more than 60 years ago now has near-normal vision…

“In the study, published online by the New England Journal of Medicine, researchers took a small number of stem cells from a patient’s healthy eye, multiplied them in the lab and placed them into the burned eye, where they were able to grow new corneal tissue to replace what had been damaged. Since the stem cells are from their own bodies, the patients do not need to take anti-rejection drugs.”

Not only do they not have to worry about anti-rejection drugs, patients who undergo adult stem cell therapies are not troubled by the moral and ethical dilemma of destroying small humans, embryos, for scientific research. Also unlike embryonic stem cell research, treatments with adult stem cells have yielded real results:

“Researchers followed the patients for an average of three years and some as long as a decade. More than three-quarters regained sight after the transplant. An additional 13 percent were considered a partial success. Though their vision improved, they still had some cloudiness in the cornea.

“Patients with superficial damage were able to see within one to two months. Those with more extensive injuries took several months longer.

“‘They were incredibly happy. Some said it was a miracle,’ said one of the study leaders, Graziella Pellegrini of the University of Modena’s Center for Regenerative Medicine in Italy. ‘It was not a miracle. It was simply a technique.’

“The study was partly funded by the Italian government.”

I’ll tell you what the miracle is. Its a miracle that the Italian government funded a study involving only the use of adult stem cells. Here in the U.S., research with adult stem cells is only in the preliminary stages while after only two months in office, President Obama ended the ban on embryonic stem cell research. Since March 2009, there has been little to no success with embryonic cells. Hopefully the American science & research community will take this hint from our Italian friends!