Last night the SBA List was honored to receive the award for Grassroots Organization of the Year at the prestigious Weyrich Awards Dinner!

The Weyrich Awards honor groups and individuals deemed to have made a major contribution to advancing the cause of liberty and who follow in the footsteps of conservative champion Paul Weyrich, the first president of the Heritage Foundation.

This is the second time in three years that the SBA List has been named Grassroots Organization of the year and it is thanks to our more than 365,000 members across the country.

SBA List President Marjorie Dannenfelser accepted the award on behalf of all pro-life activists. In her short remarks, Marjorie explained that the pro-life battle is truly a movement that is driven by the grassroots. All of our successes stem from the passion and dedication of the activists living out their pro-life values and persistently working to protect the unborn and their mothers — day in and day out. 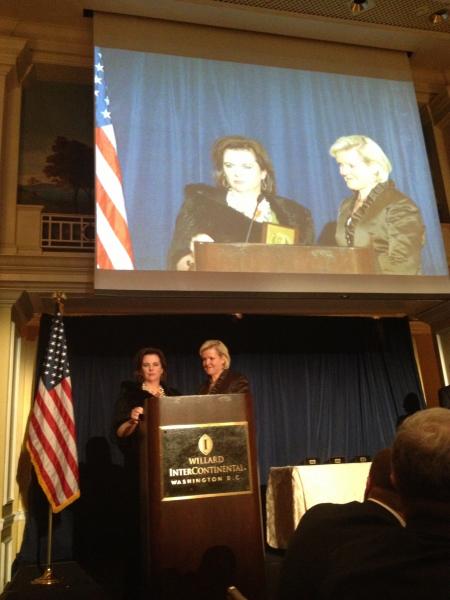 This year, the SBA List continues to lead the fight to protect unborn children, mothers, and pro-life taxpayers. At the federal level, the SBA List was a key coalition-builder among pro-life and social conservative groups with the launch of the Call2Conscience.com campaign. More than fifty national and statewide groups signed on to the coalition to apply intense grassroots pressure on Congress to protect Americans of faith and conscience from the Obama Administration’s abortion pill mandate.

SBA List is also looking ahead to the 2013 and 2014 elections to ensure authentic pro-life leaders are elected at all levels of government. Earlier this month, the SBA List endorsed Ken Cuccinelli for Governor in Virginia and pledged $1.5 million to the race.

Thank you for your continued support!