Last Thursday Susan B. Anthony List and its partner, Women Speak Out PAC, dodged rainstorms across North Carolina to announce plans for the 2020 Campaign at press conferences with local pro-life activists in Raleigh and Greensboro.

As of this morning, the SBA List ground team has already visited more than 86,096 homes across North Carolina! The team, led by State Director Michelle Ashley and field directors Linda Mooney, Matthew Overby, and Nichole Denny, is currently active in Raleigh, Charlotte, and the Triad.

At our press events last week, spokeswomen noted the release of Women Speak Out PAC’s “Party of Death” ad, which aired in the Raleigh and Greensboro markets to complement the timing of the announcement. We were pleased to be joined by pro-life champions such as State Senator Joyce Krawiec (District 31), a member of SBA List’s Nat’l Pro-life Women’s Caucus, in Raleigh and Clarence Henderson, President of the NC Frederick Douglass Institute in Greensboro.

Check out some of the coverage from the events in the News & Record and from WNCN (CBS). Our focused, battle-tested voter outreach method will ensure we reach the voters who can provide President Trump and pro-life Senate candidates, like Senator Tillis, the winning margin on Election Day. 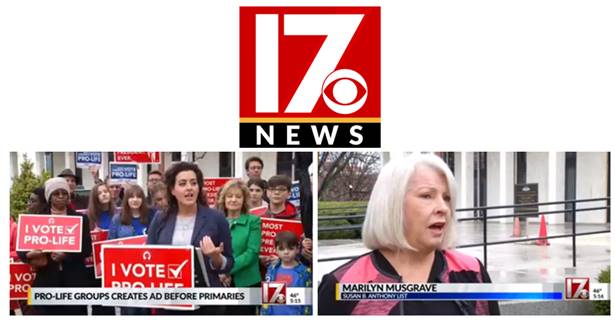