This article originally appeared on The Hill’s Washington Scene on February 24, 2011.

The Susan B. Anthony List had its fourth annual gala Wednesday evening at the Willard Hotel. Honorary co-hosts Rep. Mike Pence (R-Ind.) and his wife Karen welcomed hundreds to the event which honored Rep. Virginia Foxx (R-N.C.) for her efforts in the pro-life moment.

Those who received the annual Susan B. Anthony Young Leader Awards included State Rep. Rachel Burgin (FL-56), Catherine Foster, Sarah Makin and Chelsea Rearick. All have made significant contributions to the pro-life arena.

“We are at the beginning of the end of Roe v. Wade,” Pence said in his keynote speech. “We must never remain silent when great moral struggles are being waged.”

Irish tenor Anthony Kearns entertained the audience between courses, which included filet and crabcakes and a lime chibouste.

— Report by Kate Oczypok and photographs courtesy of Susan B. Anthony List 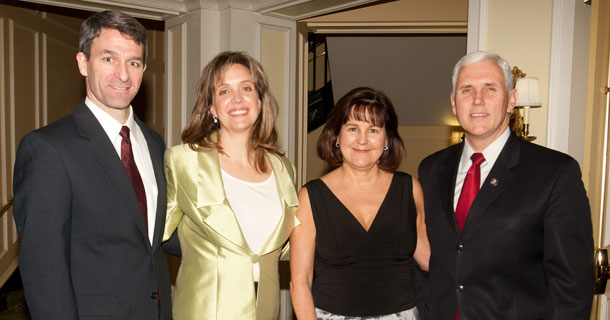 Rob Kania, SBA Board Member and his sons Robbie and Luke Kania