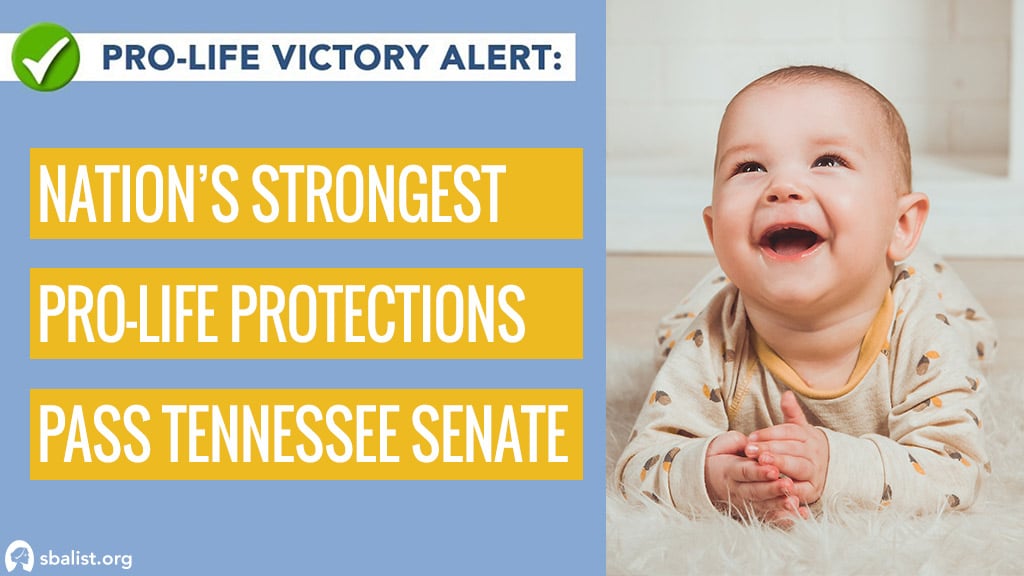 Washington, D.C. –  Today Susan B. Anthony List (SBA List) celebrated the passage of a Tennessee law that protects unborn children as soon as their heartbeat can be detected; bans discriminatory abortions due to sex, race, or a diagnosis of Down syndrome; stops late-term abortions after five months of pregnancy, a point when science shows unborn children can feel pain; and includes strong provisions protecting women’s right to informed consent. The bill passed the Tennessee Senate by a vote of 23-5 early this morning.

“Tennessee’s landmark new law includes some of the strongest protections in the nation for unborn children and their mothers,” said SBA List President Marjorie Dannenfelser. “This law recognizes the humanity of the unborn child by stopping abortion as soon as a heartbeat can be detected, protecting them from lethal discrimination in the womb, and ending late-term abortions after five months, when unborn babies can feel excruciating pain. Tennesseans, along with the overwhelming majority of Americans, reject the abortion extremism seen in states like New York and Virginia, where Democrats have pushed to expand abortion on demand through birth and even infanticide. Tennessee is the latest proof of growing nationwide momentum to humanize our laws and challenge the radical status quo imposed by Roe v. Wade.

“We thank Governor Bill Lee for his leadership in making pro-life protections a key part of his agenda and all our pro-life allies in the Tennessee General Assembly for the bold step they have taken today.”

Polling conducted earlier this year found that 65% of Americans, including 50% of those who self-identify as pro-choice, oppose discrimination abortions carried out because a baby has Down syndrome.