Washington, D.C. – At the request of the abortion lobby, a Florida judge announced plans to temporarily block a law signed by Governor Ron DeSantis earlier this year that protects unborn children and their mothers from painful later abortion after 15 weeks of pregnancy. The announcement comes one day before the law is scheduled to take effect. Governor DeSantis’s administration has vowed to appeal the ruling, and the case could make it to the state supreme court.

Susan B. Anthony Pro-Life America issued a statement in response:

“Every day the clear will of Floridians is blocked, unborn children who feel pain can be killed in brutal late abortions,” said Marjorie Dannenfelser, president of Susan B. Anthony Pro-Life America. “In the Dobbs era, the right to find consensus on abortion policy belongs to the people, not the courts or the abortion industry. The overwhelming majority of Floridians want commonsense protections for unborn children in the law. Moreover, Florida pregnancy centers provide millions of dollars a year in vital services to women and families, free of charge. We thank Governor DeSantis for his strong statement defending the innocent unborn. We proudly stand with him and the people of Florida in their legal battle in which thousands of lives are at stake.”

Broad legal protections for unborn children and mothers are in effect in 11 states, with more poised to follow swiftly. SBA Pro-Life America has launched an interactive map to track life-saving laws in the states and the estimated number of abortions impacted: 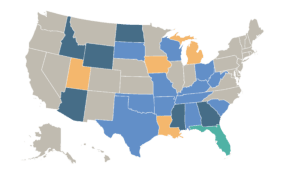 The SBA Pro-Life America and Women Speak Out PAC field team has boots on the ground in Florida and has visited over 360,000 homes of voters across the state. This election cycle, SBA Pro-Life America and its entities plan to spend $78 million to protect life across America. This includes reaching eight million voters across battleground states – four million directly at their doors – to take back the U.S. House and Senate.