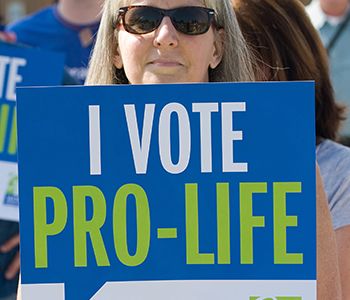 Washington, D.C. – Today Susan B. Anthony List (SBA List) and its partner super PAC, Women Speak Out PAC, announced plans for the 2020 Campaign. The comprehensive effort will include boots on the ground, voter contact mail, phone calls, and digital ads, and is part of the organizations’ overall $52 million budget for the 2020 cycle.

The SBA List ground team has already visited more than 460,000 homes across battleground states this election cycle and is currently visiting voters in Arizona, Florida, and North Carolina. The team will expand in phases to Iowa, Georgia, Michigan, Pennsylvania, Texas, and Wisconsin and will make four million visits to voters overall before Election Day.

“The stakes of this election could not be higher. Democratic contenders for president are lining up to support abortion on demand, and even infanticide, and declaring war on even the most modest pro-life policies. Meanwhile, President Trump has governed as the most pro-life president in our nation’s history,” said Mallory Quigley, national spokeswoman for Susan B. Anthony List and Women Speak Out PAC’s independent expenditure campaign. “Polls confirm what our on-the-ground experience and message testing show to be true: Democrats’ abortion radicalism is a liability for them at the ballot box.  From now until Election Day, our team will go door-to-door visiting traditional Democrat voter groups who may simply be unaware of the Democrats’ support for extreme pro-abortion policies. Our focused, battle-tested voter outreach method will ensure we reach the voters who can provide President Trump and pro-life Senate candidates the winning margin on Election Day.”

“Over the last three election cycles, the SBA List and Women Speak Out PAC field team has visited more than 4.6 million voters with more than four thousand canvassers.  Our state-of-the-art ground game played a critical role in electing President Trump to the White House and our current pro-life majority in the U.S. Senate,” writes Tim Edson, SBA List’s National Campaign Director, in a memo to interested parties. “With nearly 10 months to go until Election Day 2020, our canvassers have already visited 460,000 voters in the critical swing states, educating them about the extreme pro-abortion positions of Democratic presidential candidates and Senate candidates bought and paid for by Planned Parenthood and the abortion lobby.”

SBA List President Marjorie Dannenfelser previously served as chair of President Trump’s Pro-life Coalition after securing four pro-life commitments from the nominee during the 2016 campaign. SBA List is tracking the pro-life wins of the Trump-Pence administration at www.lifeontheballot.com.