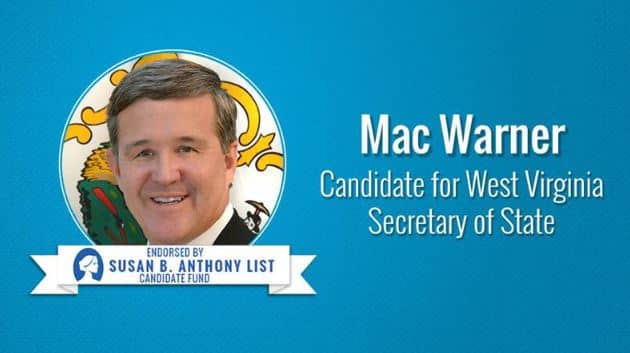 “Mac Warner is a champion of fair and secure elections and a strong pro-life leader whom we are proud to endorse for re-election,” said the Honorable Marilyn Musgrave, SBA List Candidate Fund Vice President. “Warner is a committed, lifelong public servant, having served our country honorably around the world in the Army and then setting impressive records for voter registration and reform as West Virginia’s secretary of state. Furthermore, his staunch pro-life values align with the majority of West Virginians who stand with President Trump, in contrast to Natalie Tennant, an extremist endorsed by radical pro-abortion lobbying groups. In such a critical election year, when the stakes are life or death for countless unborn children and Americans’ concerns about safe and secure voting are in the spotlight, we can trust Mac Warner to protect the integrity of elections for all West Virginians.”

Mac Warner is a graduate of the U.S. Military Academy at West Point and a former JAG officer. After 23 years in the U.S. Army he retired and worked for the State Department before his election as West Virginia secretary of state. He was sworn in January 2017. He has since worked to improve and maintain the state’s voter rolls and register new voters and has helped the state become a leader in election security. Warner is a sixth generation West Virginian. He and his wife Debbie have four children and four grandchildren.