At 2 AM this morning, I was standing outside the Senate chamber in the U.S. Capitol when the latest effort to repeal and replace Obamacare – that would have defunded Planned Parenthood – was defeated by just one vote, 51 to 49.

Earlier in the evening, as Senators filed into the Chamber, Vice President Pence and I had a few moments to share words of optimism while he was arriving at the Capitol and prepared to break an expected tie vote. Sadly, that moment did not come.

There is no other way to put it: This is a painfully disappointing blow to our efforts to enact pro-life health care reform that defunds Planned Parenthood.

Your SBA List team began working on this effort immediately after President Trump was elected. We first worked to ensure that defunding Planned Parenthood would be included in the reconciliation bill. Once the GOP decided in January that it wanted to simultaneously repeal AND replace Obamacare, we worked tirelessly to apply Hyde Amendment protections on various funding streams.

One might think that this was a light lift. I can tell you that it wasn’t. We had to fight for the inclusion of these priorities, and then fight for their retention. But we were successful. And last night would have brought us one step closer to the finish line. One step closer to protecting unborn children from a taxpayer-funded death and defunding abortion giant Planned Parenthood of $400 million. Instead, we’ve been dramatically set back. 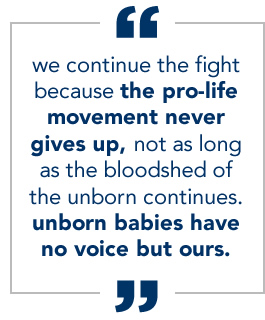 So what’s next for the Pro-Life Movement?

We continue the fight because the Pro-Life Movement never gives up, not as long as the bloodshed of the unborn continues. Unborn babies have no voice but ours.

Obamacare is likely to continue its downward spiral, likely forcing Congress to act. Already last night, there are hints this will be attempted in a bi-partisan fashion. We will fight for and demand that Hyde Amendment protections are included in any reforms.

Meanwhile, we will not rest until Planned Parenthood is defunded. I can tell you that this battle has strengthened the resolve of our allies in Congress to get the job done. The path to doing so in the immediate future has gotten significantly narrower, but not impossible.

While we continue these battles in Congress, there are also significant steps that can be taken through Executive action, particularly at the Department of Health and Human Services. We already have laid some of the groundwork in case we found ourselves in this moment.

On the political front, we must recruit and elect courageous Senators in 2018 who are fully committed to our priorities and will keep their word. While we currently have a Republican majority in the Senate, we need a bigger, bolder, more courageous pro-life majority. I’ve already gotten to know a few candidates who I think fit this mold. We’ve already began door knocking in two 2018 battlegrounds – Florida and Ohio – with an aggressive plan to move into more battlegrounds by the end of the year.

Click below to read a recent profile piece in USA Today on our 2018 ground game that we launched on July 1 – a full 18 months out from the midterms.

This is a mere setback in the middle of a succession of tremendous gains. It is emblematic of all successful human rights movements in our nation’s history. The power of the movement which strikes at the human heart and the inexorable march of gains, while interrupted at times, cannot and will not cease until clear and certain victory. Then and only then will we rest.

For now, we will use this moment to refuel, re-group, and give thanks for the miraculous gains and blessings, and then plan our way forward that will only be possible with our continued partnership with you.