After Indiana Gov. Mitch Daniels signed legislation preventing approximately $2 million from reaching the coffers of the state’s 28 Planned Parenthood offices, the organization, through an official press release, argued that such action would “take away health care from thousands of women in Indiana.”

Thanks to the Live Action investigation, and resulting video, we now know that all Planned Parenthood locations called by undercover investigators admitted that Medicaid patients could still receive the same services at numerous other clinics and/or hospitals. Specifically, a report issued by Gov. Daniels found that “there are approximately 800 Medicaid providers which are eligible to provide Medicaid clients with health and family planning services.” 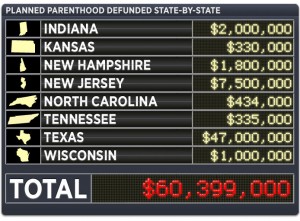 Planned Parenthood has again been caught trying to save their anti-life operation—regardless of the truth. Don’t let them get away with it—watch Live Action’s new video and consider signing their petition.