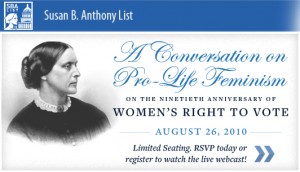 These days, few terms provoke more animated response from both the pro-life and pro-abortion sides than “pro-life feminism.”

The right to end the life of an unborn child has been defined by most of the academic world and mainstream media as the centerpiece of contemporary feminism, causing many women, who otherwise support the ideals of equality of opportunity, to reject the label of “feminist.” But the increasing number and strength of pro-life women rising in business, academics, and now the political world is changing this notion. These women, including those endorsed by the SBA List Candidate Fund like Carly Fiorina in California, Nikki Haley in South Carolina, and Michele Bachmann in Minnesota, are forcing a profound reconsideration of the concept of authentic “feminism.”

The modern feminist movement helped to make strides for women—but at what cost? The death of untold numbers of unborn children and women—that is the profound cost of dividing women from their children and diminishing their exceptional creative power as bearers and protectors of human life.

Susan B. Anthony and the early feminists of the 19th century did not expect or desire this division between mother and child that has been perpetuated by women like Gloria Steinem and Jane Fonda. The evidence is on our side: Susan B. Anthony’s newsletter, “The Revolution,” refused to carry advertisements for abortifacients, a potential source of significant revenue in its day, and regularly denounced abortion and infanticide.

Tomorrow at The Yale Club in New York City, an academic panel entitled “A Conversation on Pro-life Feminism” will continue the national conversation on the meaning of authentic women’s leadership and address the charges and challenges that are being mounted in the media with increasing frequency (and occasional desperation) by advocates of the modern feminist revisionism.

This panel event will be streamed live online tomorrow morning (Thursday, August 26th), from 9:30 to 11:00 AM.

Our scholars, led by Helen Alvaré, J.D, M.A., of George Mason University’s School of Law, will address:
•    The claim that the first wave of women’s rights activists were pro-life
•    The ethical and philosophical harmony of a pro-life feminist position
•    The long-term significance of the array of strong, pro-life female candidates running for federal, state and local offices this year

Don’t miss this chance to hear from the experts on the history of authentic pro-life feminism and its implications, particularly as we approach the midterm elections and the “Year of the Pro-life Woman.” Register now to watch the live webcast of the conversation.