Showing that family takes precedent over politics, Rick Santorum took a break from the campaign trail to be with his sick daughter, Bella, aged 3. According to LifeNews, Bella, who has Trisomy 18 or Edwards Syndrome, was admitted to the Children’s Hospital of Philadelphia on Saturday night with pneumonia in both her lungs. 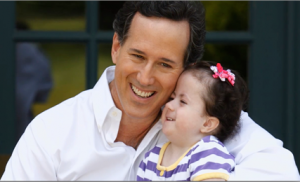 Santorum canceled a few of his Florida campaign events to be with his daughter over the weekend, but will return to his campaign “as soon as he can,” according to his oldest daughter, Elizabeth. She added that her father “wishes he could be here” but is “exercising his most important role, which is being a dad. So that’s why he’s home.”

Rick and Karen Santorum are no strangers to hardship when it comes to their family, and they have never failed to respond with love for their children, no matter what difficulties they might face. The story of their unborn baby Gabriel, who the doctors said would not live, has become famous throughout the country. Despite the doctors’ predictions, Gabriel was born alive. As Rick Santorum told the audience at a Pennsylvania pro-life event, “For two hours he lived a life that knew only love.” Their heartbreak over his loss led to Karen’s book, Letters to Gabriel, which has helped many parents through the pain of infant death.

In the same speech, Santorum spoke about the crisis he faced when Bella was diagnosed with Trisomy 18, which results in stillbirth 50 percent of the time. Though he initially tried to detach himself from his daughter, he came to realize, “This child…can do nothing but love me.” According to Santorum, the one-year survival rate for Trisomy 18 is one percent, but Bella defied these odds by recently celebrating her 182nd week of life.

The Santorums provide an excellent example of how we should love and cherish each child, without regard to how different or bleak their prospects might seem. Some might think there is nothing more important to a presidential candidate than winning the race. Instead, Rick Santorum cancelled his important campaign events to be with his daughter, giving a powerful testimony to love and the value of human life, which trumps even the office of the President of the United States.