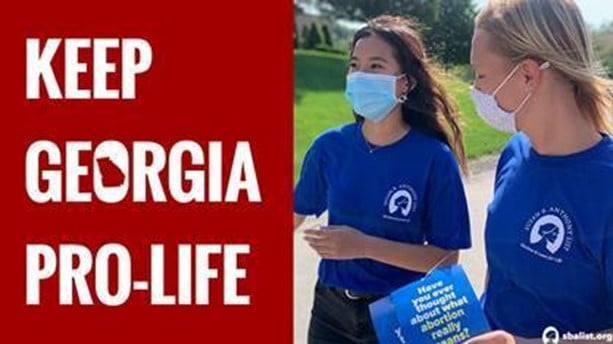 Washington, D.C. – In response to remarks given by Joe Biden, as well as pro-abortion Democratic candidates Jon Ossoff and Raphael Warnock at a campaign event today in Georgia, the national pro-life group Susan B. Anthony List (SBA List) issued the following statement:

“When Joe Biden says Georgians must vote like lives depend on it, he is right – at stake in the upcoming runoff elections is not only the fate of the U.S. Senate, but that of countless unborn children and their mothers, and of our nation itself. Unfortunately, Biden and his fellow radicals Jon Ossoff and Raphael Warnock are too afraid to tell the people what they truly stand for: abortion on demand through birth, for any reason, at any cost including expanding the Supreme Court. Abortion extremism is a losing issue in Georgia and across America. Since the Democrats won’t tell voters the truth, our canvassers will.”

Earlier this month Susan B. Anthony List’s partner Women Speak Out PAC (WSO PAC) announced that its Georgia ground team will make 750,000 visits to voters in person at their doors ahead of the January 5 runoff. This is nearly double the groups’ original plan for canvassing in support of pro-life Senators Kelly Loeffler and David Perdue.

The group’s Georgia campaign is an expansion of their $52 million+ 2020 campaign. The largest election effort in the organization’s history reached more than eight million voters across 10 key battleground states. Details of the campaign can be found at SBA List’s 2020 Election HQ.