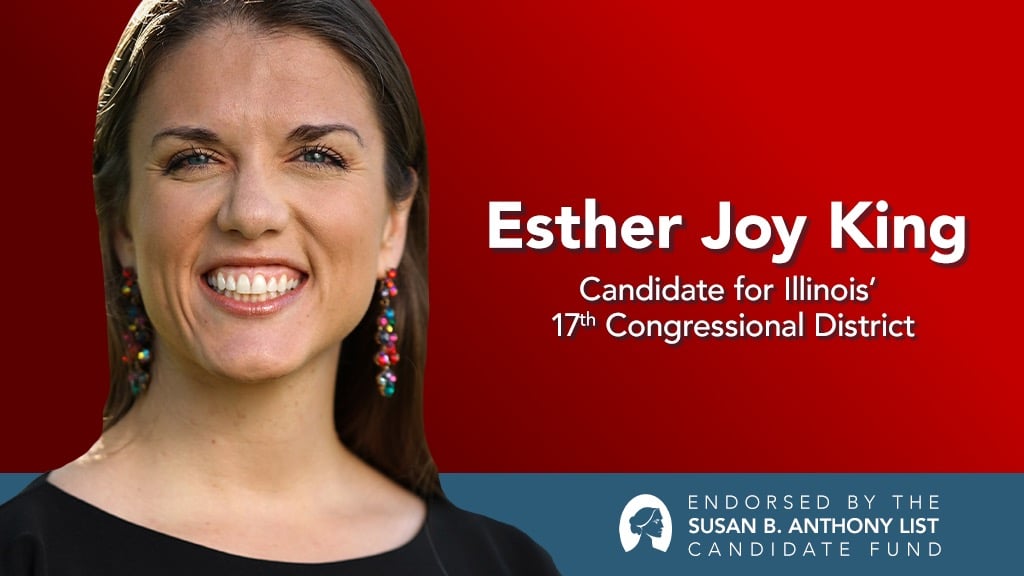 “Esther Joy King is a battle-ready pro-life leader with a lifelong passion to serve and we are proud to endorse her for Congress,” said Hon. Marilyn Musgrave, SBA List’s vice president of government affairs. “From the Mexican border to the streets of Kabul, Afghanistan, Esther has traveled the world serving our country and the disadvantaged. She deeply appreciates America’s role in safeguarding freedom and human rights – especially the right to life. Having seen Taliban oppression up close, she is a longtime champion of authentic women’s rights and is committed to real alternatives to abortion for women and families. At a pivotal moment in history when the abortion lobby in Washington and Springfield has grown increasingly extreme, pushing to impose abortion on demand until birth nationwide, Esther will courageously stand up for all Illinoisans, born and unborn. We urge all voters of the 17th District to get out and support her in the primary.”

King grew up in a missionary family along the U.S.-Mexico border. As an adult, she continued this tradition of service as an aid worker in Afghanistan. She returned stateside to pursue a law degree from Northwestern University in Chicago and eventually settled in East Moline, Illinois, where she still lives and invests in her community. Shortly after graduating from law school, she joined the U.S. Army Reserve as a JAG Corps officer and continues to serve, earning the rank of captain.