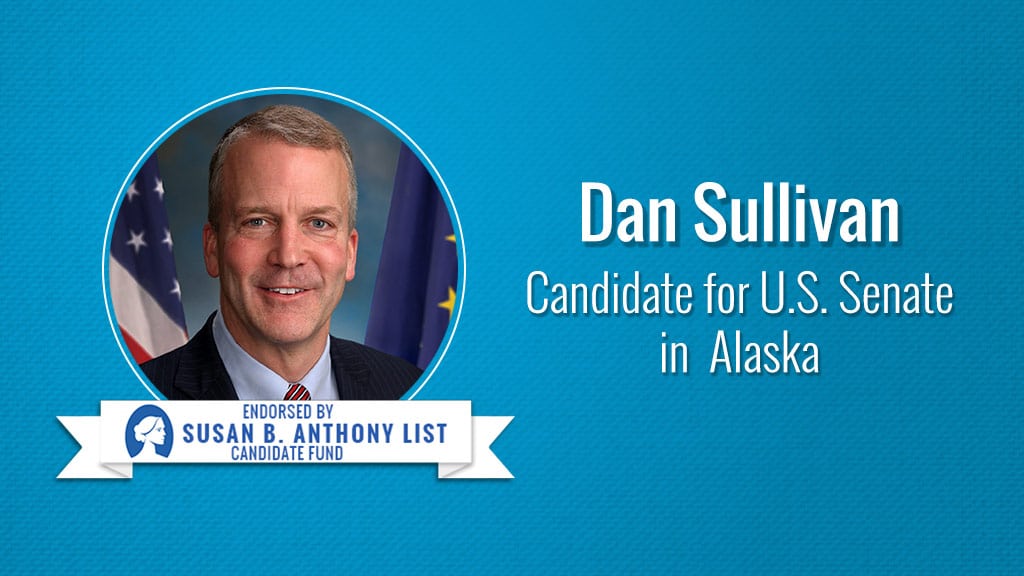 “We are proud to endorse Senator Dan Sullivan, who has earned an ‘A’ rating on our National Pro-Life Scorecard thanks to his 100% pro-life voting record,” said Marilyn Musgrave, SBA List’s vice president of government affairs. “Whether he is leading the charge to stop domestic violence, or working to end late-term abortion and infanticide, Senator Sullivan always stands up for the vulnerable. As the voice of pro-life Alaskans in the Senate, he brings the tenacity of a Marine to the fight for the unborn and their mothers. With extensive legal experience, he also keenly understands the importance of judges who respect the Constitution. Dan’s extremist opponent is backed by the big abortion lobby and promises to side with radical Senate Democrats to block qualified judicial nominees and enshrine abortion on demand into federal law. Senator Sullivan is the right choice for Alaska and we encourage all pro-life voters to support him.”

Sullivan was elected to the U.S. Senate in 2014. He is a co-sponsor of the Pain-Capable Unborn Child Protection Act, the Born-Alive Abortion Survivors Protection Act, and the No Taxpayer Funding for Abortion Act. He holds an ‘A’ rating on SBA List’s National Pro-life Scorecard.

Previously, Sullivan was Alaska’s attorney general and commissioner of the Alaska Department of Natural Resources. Under the George W. Bush administration he was an assistant secretary of state as well as a director in the International Economics Directorate of the National Security Council staff at the White House. His experience also includes clerking for the 9th U.S Circuit Court of Appeals in Fairbanks, Alaska, the U.S. Court of Appeals for the D.C. Circuit, and the Alaska Supreme Court.

Sullivan is a colonel in the Marine Corps, serving since 1993 both in active duty and in the reserves, and is a recipient of the Defense Meritorious Service Medal. He and his wife Julie have three daughters and live in Fairbanks.