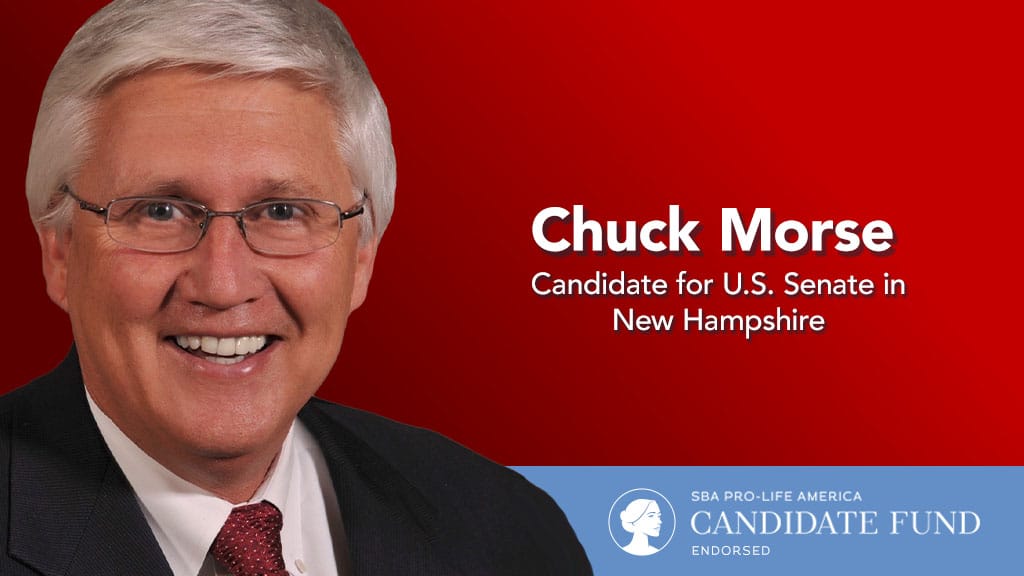 Washington, D.C. – Today Susan B. Anthony Pro-Life America Candidate Fund announced its endorsement of Chuck Morse to represent New Hampshire in the U.S. Senate. The winner of the Republican primary will face Democratic Senator Maggie Hassan, who has earned an F on SBA Pro-Life America’s National Pro-Life Scorecard for her consistent pro-abortion record.

Hassan supports the so-called “Women’s Health Protection Act,” legislation that would expand abortion on demand until the moment of birth and block new and existing pro-life laws.

“Granite Staters can count on Chuck Morse to stand up to extremists like Sen. Maggie Hassan who want to impose abortion on demand until birth nationwide. Strong leaders like Chuck are critical to winning back the U.S. Senate,” said SBA Pro-Life America’s president, Marjorie Dannenfelser. “Senator Hassan stands 100% in lock step with Biden, Schumer and the abortion lobby in support for unlimited abortion on demand, paid for by taxpayers, at any point in pregnancy. Chuck Morse comes from a hardworking family and understands this radical agenda is deeply out of touch. In the state Senate he led the charge to stop barbaric late-term abortions well past the point when unborn children can feel pain – a key victory in a state that previously allowed abortion right up to birth.

“Chuck will fight for the will of the people in Washington, where his proven experience getting life-saving laws enacted will be an asset. We encourage primary voters to get out and support him on September 13.”