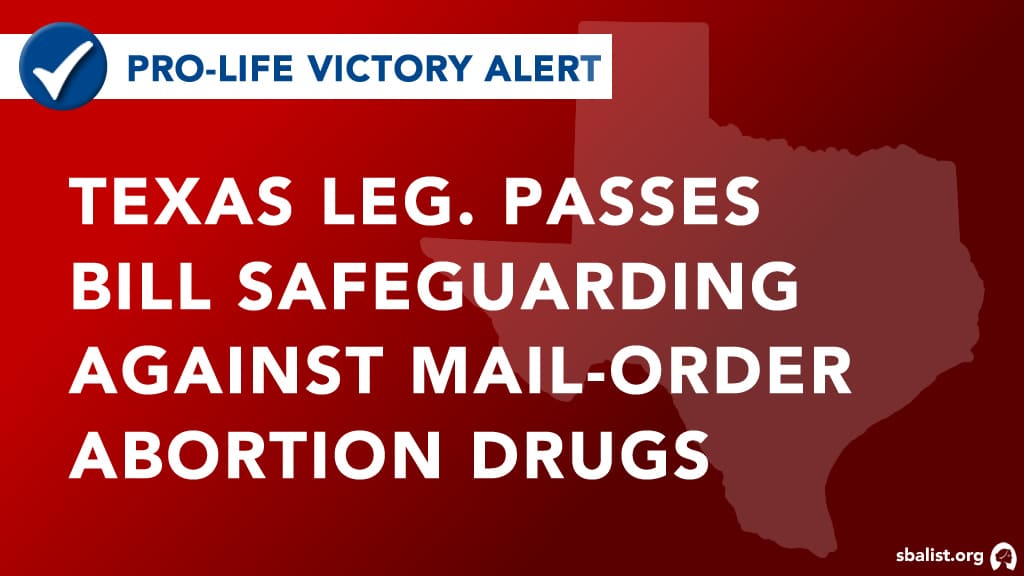 Washington, D.C. – Today the Texas House of Representatives passed S.B. 4, legislation that guards against the expansion of dangerous mail-order chemical abortion drugs. One of Governor Greg Abbott’s short-list priorities for the special session, the bill passed the state Senate for the third time earlier this month and now heads to the governor’s desk.

“The passage of vital safeguards on dangerous abortion drugs is a win for Texas women and unborn children,” said SBA List State Policy Director Sue Liebel. “Chemical abortion poses at least four times the risk of potentially serious complications compared to surgical abortion – yet pro-abortion Democrats in Washington are recklessly pushing for a permanent rollback of FDA safety standards that keep them from turning pharmacies and post offices into abortion centers. We thank Governor Abbott, pro-life leaders in the Texas House and Senate, and all our local allies who’ve prioritized this bill. It reflects the will of the people and we look forward to seeing the governor sign it swiftly into law.”

“Safety protocols have existed since the Clinton administration at the federal level for women seeking to use abortion-inducing drugs, including an in-person visit with a doctor. As of April, the FDA is not enforcing this critical in-person doctor visit, which can help avoid serious complications or even death. This bill brings those safety protocols which have been effective for women for decades into Texas statute to ensure the doctor-patient relationship is intact and not at risk of being lost. This will save women’s lives.”

The study analyzed complications which occurred between September 2000 and February 2019 in the U.S.:

The study authors also estimated that complications are significantly underreported in the U.S., with the U.S. Food and Drug Administration (FDA) relaxing reporting requirements even further in 2016.