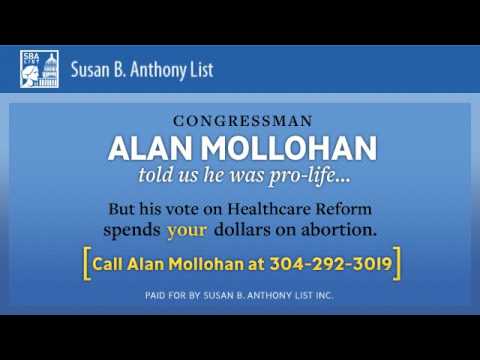 In the days leading up to the healthcare reform vote, we warned all Members of Congress that a vote for the bill was a vote for federal funding of abortion. So-called pro-life Democrats led by Rep. Bart Stupak, including Rep. Mollohan, shrunk from their principles and cast a vote resulting in the greatest expansion of abortion since Roe v. Wade. We promised Rep. Mollohan that we would make his re-election incredibly painful if he voted yes on the bill—and we are following through on that promise.

Once a true champion of the pro-life movement, Rep. Mollohan has disappointed us by choosing party over principle and the will of his pro-life constituents. The Susan B. Anthony List will continue to expose Rep. Mollohans pro-abortion vote until Election Day.

Below is an excerpt from the radio ad running in Rep. Mollohans district:

It was the ultimate betrayal.

Congressman Alan Mollohan told us he was pro-life.
Mollohan promised us he would protect the unborn.
That he would keep abortion funding out of health care.
That he would stand with us.

But Alan Mollohan betrayed us
and voted to spend federal dollars our dollars – on abortions.

Previously, Rep. Mollohan served as co-chairman of the House Pro-Life Caucus. On March 21st, Rep. Mollohan cast a vote in favor of the healthcare reform bill which included federal funding of abortion. His re-election primary is on Tuesday, May 11, 2010.
The Susan B. Anthony List is a nationwide network of Americans, over 280,000 residing in all 50 states, dedicated to mobilizing, advancing, and representing pro-life women in politics. Its connected Candidate Fund increases the percentage of pro-life women in the political process.