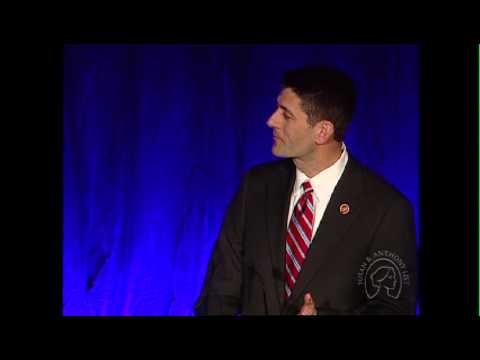 On April 11, 2013, Congressman Paul Ryan (R-WI) keynoted the Susan B. Anthony List’s sixth annual Campaign for Life Gala at the Ronald Reagan Building in Washington, D.C. Transcript is below.

Building a Coalition for Life

Thanks, everybody. It’s great to be here. I want to thank Congressman King for the introduction. I want to congratulate Lieutenant Governor Kleefisch on her award. And I want to commend the members of the SBA List—especially Marjorie Dannenfelser, Jane Abraham, and Marilyn Musgrave—for organizing this event. Looking at tonight’s program, I noticed you took Margaret Thatcher’s advice: When you wanted something done, you asked a woman. When you wanted something said, you asked a man.

Well, I’m honored by your invitation—because I’m inspired by your work. There’s a lot of talk these days about how to win the next election. Our critics say we should abandon our pro-life beliefs. But that would only demoralize our voters. It’s an odd strategy, I think: the cynical ploy followed by the thumping defeat. Besides, you’re proving the critics wrong. You’re helping pro-life leaders win races across the country. You’re showing that “what convinces is conviction.”

And you’re making headway: A majority of the country now believes abortion should be illegal in some or all cases. And young people are among our most passionate supporters. That said, we’ve had some setbacks. We’ve missed some opportunities and lost some key races. So what do we do? How do we “reclaim the human center” of this debate?

Here’s my thinking: We need to articulate a vision—one that can attract a broad coalition. To advance the pro-life cause, we need to work with people who consider themselves pro-choice—because our task isn’t to purge our ranks. It’s to grow them. We need to expand our horizon—because our critics say our vision is one of self-denial—when in fact it’s one of self-fulfillment. We don’t want a country where abortion is simply outlawed. We want a country where it isn’t even considered. We want a country that values the dignity of every life at every stage.

That vision can unite us. It can win. But we have to make the case. We have to do it with patience—and with good cheer. We have to show the pro-life cause isn’t just the cause of the unborn. It’s also the cause of the poor—and of the powerless. So our position isn’t a narrow objection to so-called abortion rights. Instead, it is a deep affirmation of human rights.

To this audience, it may seem like an open-and-shut case. Many of us are pro-life because of our faith. We believe every person is made in the image of God. So every life is precious—and worthy of protection. But if we want to appeal to the broadest audience, we need to use every tool at our disposal. We can’t just make arguments based on faith. We also need to make arguments based on reason. And if we deny the right to life, we deny the principle of equality—and with it, our belief in self-government.

The Declaration of Independence says “all men are created equal.” It rejects the old notion that some are born to rule—and others to obey. In fact, it calls this truth self-evident. It’s obvious to anyone with ears to hear and eyes to see. We each have the right to life, liberty, and the pursuit of happiness. And no one can deprive us of those rights without our consent.

Consent is the source of power, not wealth or ancestry. Government isn’t the master of the people. It’s their servant. So we must stay vigilant—because when government assaults any of our rights, all of them are endangered. And once some people can deny the rights of others, we’re no longer equal. The foundation of our government is weakened. The rights of the people are imperiled. Anyone can understand that danger.

The way I see it, we are the heirs of the Founding Fathers and Abraham Lincoln—of all those people who wanted our country to live up to its ideals. And we should follow their example. In other words, we should be prudent. Our forebears knew to strive for perfection, not to expect it—because mankind is flawed. Progress takes time. It takes work. And it takes common sense.

Take Lincoln. He hated slavery as much as anyone. But he defended a law that preserved it. He supported the Compromise of 1850, which prohibited slavery in California but allowed it in New Mexico. He even backed a law to return runaway slaves to their owners. Why? Because to end slavery, he had to preserve the Union. The country couldn’t free the slaves if it didn’t exist.

Now, Lincoln didn’t go along to get along. He used compromise to achieve his objective—which was to put slavery on the “course of ultimate extinction.” He rejected compromises that worked against his purposes. But he accepted them if they brought him closer to his goal—even in just a small way. We all know what happened. After years of turmoil, he helped pass the Thirteenth Amendment, which ended slavery for good.

Like Lincoln, we should promote civility and compromise in pursuit of the common good. Perhaps the biggest mistake the Democratic Party ever made is it chased the pro-life movement from its ranks—with the notable exception of my friend Congressman Dan Lipinski. In complete disregard of millions of pro-life Democrats, President Obama has catered to the extreme elements of his party. In the Clinton years, the stated goal was to make abortion “safe, legal, and rare.” Now, the party stands for an absolute, unqualified right to abortion—at any time, under any circumstances, and even at taxpayer expense. By contrast, we understand the best way to advance a cause isn’t to push our political adversaries away. It’s to convince them.

And people can surprise you. Not long ago, there was a doctor who performed 75,000 abortions in his career—even on his own child. His commitment was so extreme that he helped found NARAL. Could we ever work with a man like this? In fact, we did. Late in his life, Dr. Bernard Nathanson became a great spokesman for life. He renounced atheism. But religion didn’t change his heart. Science did. The image of the ultrasound—of that tiny beating heart—made him realize that was life.

Not everyone will undergo such a change. But we should work with people of all beliefs to make progress. Building on the work of Professor Hadley Arkes, I think we should plant flags in the law—small changes that raise questions about abortion. People who consider themselves pro-choice don’t agree with us on everything. But many agree we should stop taxpayer funding of abortion. That’s “a flag.” Many agree we should require parental notification. That’s another “flag.” Many agree we should restore the Mexico City policy. That’s one more “flag.” Even if we can’t agree on the final step, we can work with them on a few concrete steps. We can raise doubts—and save lives.

Such painstaking work can be tiring. The give-and-take of legislation usually is. But we can’t let up. And we have to recognize opportunities for what they are. Take my friend, former congressman Bob Dold. A pro-choice Republican from Illinois, he was an outspoken advocate for Planned Parenthood. Yet he voted to stop Obamacare from covering abortion. And he voted to allow doctors to refuse to perform abortions on conscience grounds. Last year, he lost to a Democrat who today is another down-the-line, pro-choice stalwart in the House. Dold was an ally of our cause. We need to work with others like him.

Labels can be misleading. A pro-choice Republican senator from Massachusetts nearly derailed Obamacare just by being elected. But a pro-life Democratic congressman from Michigan delivered the votes that passed it into law. The SBA List needs to help elect as many pro-life leaders as possible—and then work with people of all beliefs to pass pro-life legislation. We can’t abandon Washington to pro-choice extremists—because good legislation will help us change hearts and minds.

That’s our goal. And we’ve got some work to do. We need to show the country our mission isn’t just to protect life, but to improve it. We have to remind people that concern for the poor doesn’t demand faith in big government. It demands something more—from all of us.

The poor and powerless, they need a helping hand. We’re ready to offer it. But they need more than a check in the mail. They need a loving family and a supportive neighborhood. They need a vibrant community. Those experiences—of providing for their families, of being a part of something—they’re what we all need. And we can speak to those needs—because just as we see the worth of every human life, we see the potential in every human being.

Government can’t create that potential. It can’t confer dignity. But it can protect it. We want government to treat us equally—to protect our natural rights. We want government to make room for our communities to grow—so the families in them have room to thrive. That’s the vision we need to articulate. We see a country where families are strong, where the economy is growing, and where women have real choices—between good schools and good jobs and great opportunities.

We want to turn this vision into reality. And you are. Pro-life groups sponsor around 2,500 crisis-pregnancy centers across the country. That’s more than the number of abortion clinics. And many of these centers rely on donations—from people like you. My wife Janna and I also contribute. These centers serve about 2 million people a year. They offer adoption services, testing and treatment for STDs, ultrasounds, parenting classes, and counseling.

You’re not just protecting the innocent. You’re also helping the needy—in your churches and charity groups, like the Gabriel Network and Project Rachel. Take, for example, the Manhattan Bible Church. For 40 years, it’s run a soup kitchen and an elementary school for poor children. It’s fed over a million people and taught 90,000 students. Its members have adopted hundreds of children and counseled hundreds of drug addicts. This one church operates 40 ministries to “the least among us”—at no cost to the federal government.

Maybe the reason we don’t often talk about these stories is that we’re so used to them. They’re what we think of when we hear of the pro-life movement. Well, our job is to spread the news. By working with people of all beliefs, we can show the world the good work you’re doing. And we can win allies. That’s how you bring people into the fold. First you respect their views. Then you politely encourage them to change them.