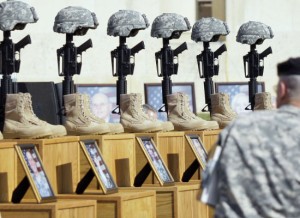 The tragic shooting at the Fort Hood military base last week claimed the lives of 13 adults and one unborn child.

The United States Army is bringing 13 charges of premeditated murder against Maj. Nidal Malik Hasan, according to the Washington Post, but has not ruled out a 14th charge.

Additional charges were possible, said Chris Grey, spokesman for the Army Criminal Investigation Command. It had not been decided whether to charge Hasan with the death of the unborn child of a pregnant soldier who died, officials told The Associated Press on condition of anonymity because they were not authorized to speak about the case publicly.

Hasan will be tried in a military court-martial, where the jury is made-up of military officers and subject to military jurisdiction. According to the Alliance Defense Fund, a provision similar to Laci and Conner’s Law already exists in military legal code.

The horrific killings at Ft. Hood remind us that all life is precious. In the face of this crime against humanity, we are once again provided with an opportunity to define humanity. Each victim had a beating heart that was stopped by the hate of one man. And as such, each victim deserves to be remembered in the application of justice.