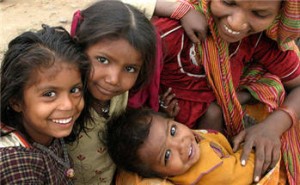 In 1979, China enacted a policy that discouraged the ethnic Han majority from having more than one child. As Suzy B blog readers know this policy quickly spread, and has remained in place ever since. Though China is known for its vast population, this policy has not brought positive results as Chinese officials had hoped but rather has led to a severe imbalance of gender as well as a shortage of youth to replace the ageing population.. Despite the disastrous example in China, India is now looking to enact a similar policy of discouraging families from having more than two children.

The new law in India would not only fine families if they exceed the two child limit, but families could also face jail time and a loss of government benefits. Former Supreme Court Justice V. R. Krishna Iyer is heading the committee that is drafting the law. The law would prohibit political and religious organizations from detering people from using contraceptives. Father Stephen Alathara, spokesman from The Kerala Catholic Bishops Council saidthe law is an attempt to “undermine family values and divide society along communal lines.” Christian and Muslim citizens are coming together and speaking out against this law. Muslim leader Abdul Samad Pukkottu of the state Sunni Youth Federation said, “It’s an attempt to curtail religious freedom and faith. We will oppose it.”

The law not only infringes on the rights of religious freedom and speech but it takes away parental rights and dramatically hurts the family unit. People are fighting back and offering incentives of their own which encourage families to grow. In Kerala, a Catholic parish is offering 10,000 rupees for every fifth child born in the family in within their perish. Father Boquet, president of Human Life International said, “Christians, Muslims and all who respect the dignity of human life must resist the radical population control agenda being imposed in Kerala and around the world.” It would benefit India to look to China as an example of bad policy when trying to control population. Human life is of great worth and that should never be discouraged.