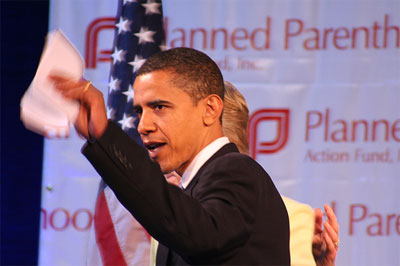 During his first term in office President Obama has earned the title of the most pro-abortion president in the history of the U.S. and here is why:
– Personally placing multiple pro-abortion politicians into office (ex. The Supreme Court, Health & Human Services, the Justice Department, the State Department).
– Overturning the Mexico City Policy and forcing taxpayers to fund pro-abortion groups in other nations.
– Overturning the limits on embryonic stem cell research put in place by pro-life President Bush.
– Starting the process of overturning pro-life conscience protections President Bush put in place to make sure medical staff and centers are not forced to do abortions.
– Authorizing the spending of taxpayer funds for embryonic stem cell research that kills days-old unborn children.
– Issuing a new order for the U.S. military requiring all military hospitals and health centers to stock the morning after pill.
– Signing Obamacare into law and giving the pro-life community a non-binding executive order, thus allowing for the federal funding of abortion.

(A complete list of President Obama’s abortion record is several pages in length and can be found here.)

This long road, paved by “choice” and [false] “hope,” becomes shorter by the day as the November 2010 elections draw near. If his declining approval rating and the surge in pro-life candidates seeking office are any indication, this road which President Obama has crafted will likely come to an end in 2010.

Lifenews.com exposed the decline in popularity of the most pro-abortion president to date:

“Overall, 42% of voters say they at least somewhat approve of Obama’s performance in office, the new Rasmussen Reports survey shows. Those are the lowest ratings yet recorded for Obama as 57 percent of likely voters now disapprove.

“The president’s approval rating has held steady in the 46% – 47% range for six months and it remains to be seen whether this new low is merely statistical noise or the start of a lasting change,” pollster Scott Rasmussen said.

Looking at the most passionate voters either way, some 24 percent of Americans strongly approve of the job Obama has done while a larger 44 percent strongly disapprove.

That gives Obama a -15 percent overall rating and a -20 rating from Americans who are most passionate about his presidency.

Just 48% of Democrats strongly approve of Obama’s job performance while 75% of Republicans strongly disapprove. Among those not affiliated with either major party, 12% Strongly Approve and 52% Strongly Disapprove — a bad sign for Obama and his pro-abortion allies heading into the mid-term elections.

In 2008, Obama won 53%-46% over Sen. John McCain, who had the backing of pro-life organizations. That means Obama has dropped 22 percent from then in the eyes of American voters.”

These declining approval ratings only help the pro-life men and women who are tirelessly campaigning for Congressional seats across the country. Women in particular are running for office in record numbers – a true testament to the uproar of authentic, pro-life feminism against the pro-abortion president and Congress. With your help, these pro-Life candidates will become the voice for the voiceless in November.

The decline in President Obama’s approval ratings are signs of the resurgence in the pro-life movement for 2012, as the American public has realized the importance of having their values protected and respected by the leader of the free world.