After getting a bit of heat from pro-aborts in the blogosphere for not including abortion as one of the outcomes of teenage pregnancy, last night, MTV’s hit show “16 and Prgenant” took on abortion.
The 30-minute special followed Markai, her boyfriend James, and their seven-month-old daughter, Zakaria. After getting pregnant for the first time in high school, Markai was featured on the first season of “16 and Pregnant.” Now, pregnant again after missing her birth control shot, Markai makes the decision to abort her second child.
When first talking about the decision, Markai is very hesitant. She says she would be unable to put her baby up for adoption because she will love him or her as soon as she feels the baby kick. In fact, “I love this baby already,” she says, “and this baby is not doing nothing but making me sick,” referring to morning sickness.
Seeking more information, Markai and a friend decide to call the local abortion clinic. Here’s where MTV allows an accurate portrayal of the abortion industry today–still relying on the same old lies. As a woman explains the procedure over the phone as a “gentle suction of the pregnancy tissue,” Markai begins to cry. Is it because deep down she knows that at 6 weeks gestation, her baby already has a heartbeat and looks much more like a human being than a “just a blob of tissue”?
The couple eventually decides to abort their child because they do not want to put their older daughter through the financial trouble James had to deal with growing up. Markai doesn’t want to make James work two jobs, like her father did, which prevented him from spending time with her. The decision is made for Zakaria, because “why shouldn’t she have the best?” Markai asks.
Later on as she recounts the abortion to her boyfriend, Markai says the nurse told her to think of it as nothing but a clump of cells. “And she’s right,” Markai says.
This picture is a baby at 6 weeks gestation: 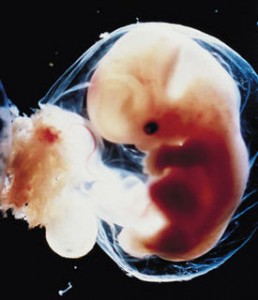 Quite amazing that while pregnancy centers across the country are being pestered to put up signs explaining procedures that they don’t provide, abortion clinics are coaxing young and vulnerable women into ending their children’s lives by misleading and lying to them. All the while, insisting that they will feel relief when it’s over.

Relief? The later half of the show featured two other young women who had also had abortions in their teenage years. Katie, who decided to have an abortion around the same time her younger sister gave birth to a baby boy, cried as she explained that years later, she still has a hard time looking at her own nephew. “At least I don’t have to seem him everyday,” she says, motioning to Markai, who is crying as well now, and referring to young Zakaria.

Now, pro-abortion and feminist bloggers are heralding this “abortion special” as “shockingly good…a great PSA for abortion,” and giving it “two thumbs up.”

I call it just the tragic truth about the lies of the abortion industry and the hurt women and families must deal with after this destructive procedure.