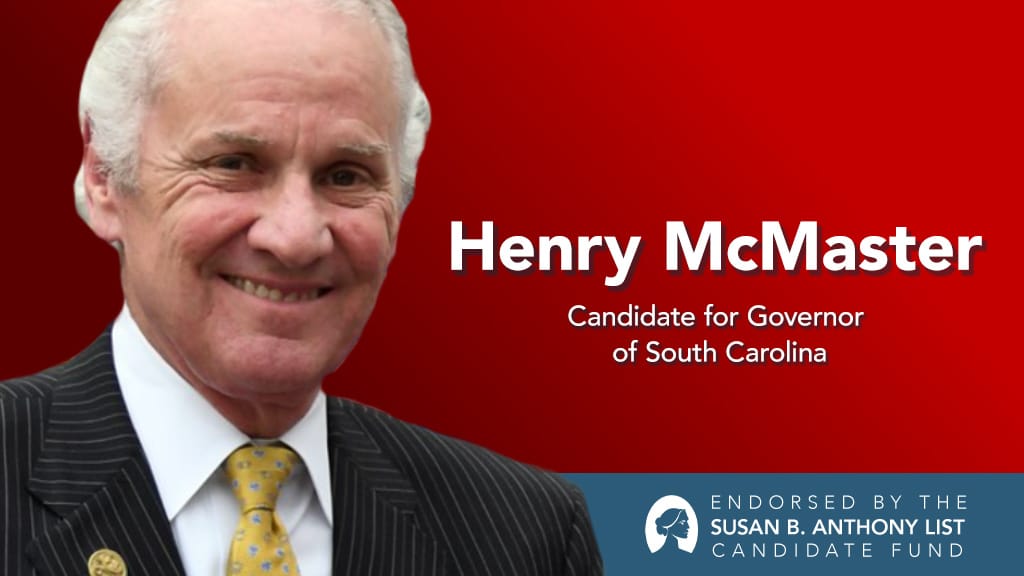 SBA List President Marjorie Dannenfelser will join McMaster and Evette, along with local pro-life leaders and activists at a press conference today, Wednesday August 11 at 1:45 p.m. at Piedmont Women’s Center in Greenville.

“Pro-life governors are key to making gains for life at the state level, and Gov. McMaster has shown great courage in this fight. He and Lt. Gov. Evette make a powerful team fighting for unborn children and mothers in the Palmetto State,” said Dannenfelser. “Acting on the will of the people, Gov. McMaster championed legislation based on the science that unborn babies have a heartbeat as early as five weeks and signed it immediately into law. He is leading the charge to humanize our nation’s radical abortion precedents at the U.S. Supreme Court so that states can finally enact popular limits on abortion. We look forward to victory over pro-abortion Democrat opponents and four more years of strong pro-life leadership in Columbia.”

Before becoming governor, McMaster served as lieutenant governor under Nikki Haley. Previously he was appointed a federal prosecutor by President Reagan and went on to serve two terms as state attorney general. McMaster signed the South Carolina Fetal Heartbeat and Protection from Abortion Act into law. He recently led 11 Republican governors in filing a brief in support of Mississippi in Dobbs v. Jackson Women’s Health Organization, in which the U.S. Supreme Court will consider the constitutionality of pre-viability limits on abortion. He has also taken action to stop state taxpayer funding of abortion businesses like Planned Parenthood and fund community health centers instead. He and his wife Peggy have two children.