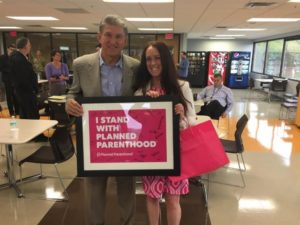 “It is an enormous mistake both morally and politically for Senator Manchin to side with Planned Parenthood, the nation’s largest abortion business,” said SBA List President Marjorie Dannenfelser.

“In more than nine times out of ten, Planned Parenthood resolves pregnancy with abortion. They are clearly an abortion-centered, profit-driven business – yet taxpayers are forced to fork over nearly $554 million each year to their coffers. Where does Sen. Manchin stand on this injustice? Last month, he voted to force states to fund the abortion giant through Title X grants. That was only a day after new footage was released showing a former Planned Parenthood abortionist describe the force needed to dismember a five-month-old unborn child struggling to survive in the womb.

“Sen. Manchin used to call himself pro-life, but this is the last straw. Susan B. Anthony List will work tirelessly in the months ahead to make sure West Virginians know of this profound betrayal of the unborn and their mothers.”

Planned Parenthood was referred to the Department of Justice and FBI for potential criminal prosecution for trafficking fetal body parts from abortions for profit. The referral was made by the Senate Judiciary Committee and followed a months-long investigation including the review of over 20,000 documents. The investigation was launched following the release of undercover videos showing Planned Parenthood executives brazenly discussing their involvement in the trafficking of baby body parts.

Susan B. Anthony List and its partnered super PAC, Women Speak Out spent more than $18 million in the 2016 election cycle, knocking on more than 1.1 million doors in battleground states to defeat Hillary Clinton and maintain a pro-life Senate. SBA List is dedicated to pursuing policies and electing candidates who will reduce and ultimately end abortion. To that end, the SBA List emphasizes the education, promotion, mobilization, and election of pro-life women.  The SBA List is a network of more than 465,000 pro-life Americans nationwide.