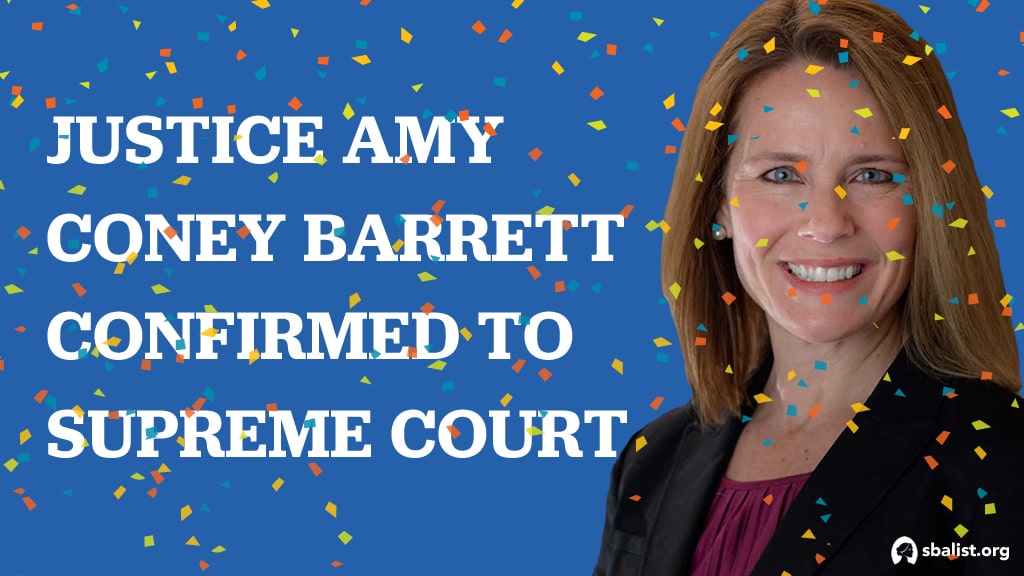 “Today our nation gained a brilliant woman jurist on our highest court,” said SBA List President Marjorie Dannenfelser. “Justice Barrett’s confirmation marks a turning point in the fight to protect unborn children and mothers. The American people can now see a glimmer of light at the end of a dark tunnel, when the Supreme Court may finally return to the people the ability to enact laws that reflect their values and save lives.

“This victory would not be possible without the unwavering leadership of President Trump, Leader McConnell, and our pro-life Senate majority. They have worked seamlessly to confirm three Supreme Court justices and 215 lower court judges. This legacy is on the ballot next week, as Democrats are hell-bent on expanding the Supreme Court and adding lower court judges if they win. We must re-elect President Trump and our Senate majority to preserve the Supreme Court and the integrity of the judiciary.”

A poll sponsored by Susan B. Anthony List and conducted by The Marist Poll shows that nearly two in three voters (61%) – including 63% of Independents and 31% of Democrats – oppose Joe Biden adding more justices to the Supreme Court if he is elected president.

SBA List and its partner Women Speak Out PAC are working to reach eight million voters before Election Day, educating them about where the candidates stand on abortion and the Supreme Court.

SBA List’s efforts to #ConfirmAmy include:

SBA List is tracking the pro-life accomplishments of the Trump-Pence administration, as well as the abortion extremism of the Biden-Harris ticket at LifeOnTheBallot.com.