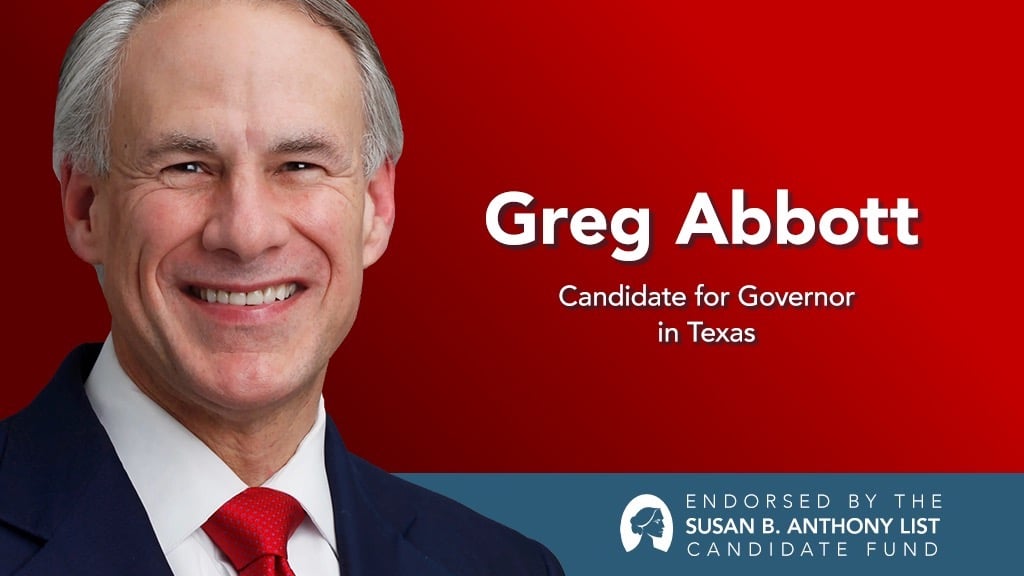 “Governor Greg Abbott is a leader of extraordinary courage in the fight for life,” said Hon. Marilyn Musgrave, SBA List’s vice president of government affairs. “Gov. Abbott prioritized safeguards for women and children against chemical abortion drugs in his special legislative session agenda last year and was relentless in getting them across the finish line. Since he signed the Heartbeat Act, the entire nation has been watching Texas, learning from his bold model to forge a path to save countless lives. He has called upon the Supreme Court to let the people of every state modernize their laws, reflecting the fact that unborn children are human beings and deserve protection. Every single time unborn children and mothers need him, he answers the call to lead bravely and with determination. We are proud to endorse him and urge pro-life Texans to re-elect him.”

Abbott was first elected governor in 2014. Previously he served on the state Supreme Court and as Texas’ attorney general. He and his wife Cecilia are native Texans and have a daughter. As governor he has consistently advocated and signed pro-life legislation. In 2021 alone he signed 12 new pro-life laws, including the Heartbeat Act – which has saved the lives of countless unborn children and protects mothers while litigation continues in the lower courts – and safeguards against mail-order abortion drugs. He was one of 12 pro-life governors to file a brief in Dobbs v. Jackson Women’s Health Organization, in which the U.S. Supreme Court will address the constitutionality of pre-viability limits on abortion. Under his leadership, the Texas Legislature also increased funding for the state’s Alternatives to Abortion program by $100 million. The program provides counseling, material assistance, care coordination and housing support.