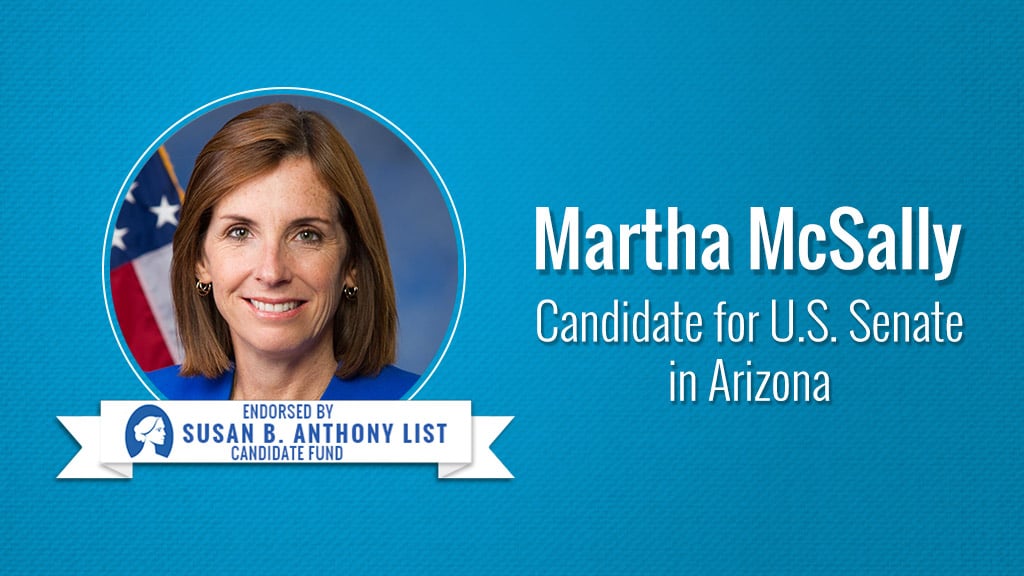 “We are proud to endorse Senator Martha McSally, who has earned an ‘A’ rating on our scorecard thanks to her 100% pro-life voting record,” said the Honorable Marilyn Musgrave, SBA List’s Vice President of Government Affairs. “In contrast, Mark Kelly is endorsed by Planned Parenthood, which supports abortion on demand up until birth, paid for by taxpayers. Kelly is beholden to the abortion lobby and is radically out of step with Arizonans.

“Sen. McSally is a strong leader and ally of unborn children and their mothers. She has championed legislation protecting babies born alive after failed abortions and has voted to limit late-term abortion and stop taxpayer funding of abortion throughout her time in Congress – standing with the majority of Americans who want to see these commonsense, compassionate initiatives enacted. We are confident voters in the Grand Canyon State will reject his extremism in November and vote to re-elect Senator McSally.”

Senator Martha McSally has a 100% pro-life voting record that includes cosponsoring the Born-Alive Abortion Survivors Protection Act, as well as supporting the Pain-Capable Unborn Child Protection Act and the No Taxpayer Funding for Abortion Act. She previously served in the U.S. House of Representatives from 2015-2019. Prior to serving in Congress, she served 26 years in the U.S. Air Force and retired with the rank of colonel in 2010. She was the first female fighter pilot in U.S. history to fly in combat and command a fighter squadron in combat. She lives in Tucson, Arizona.