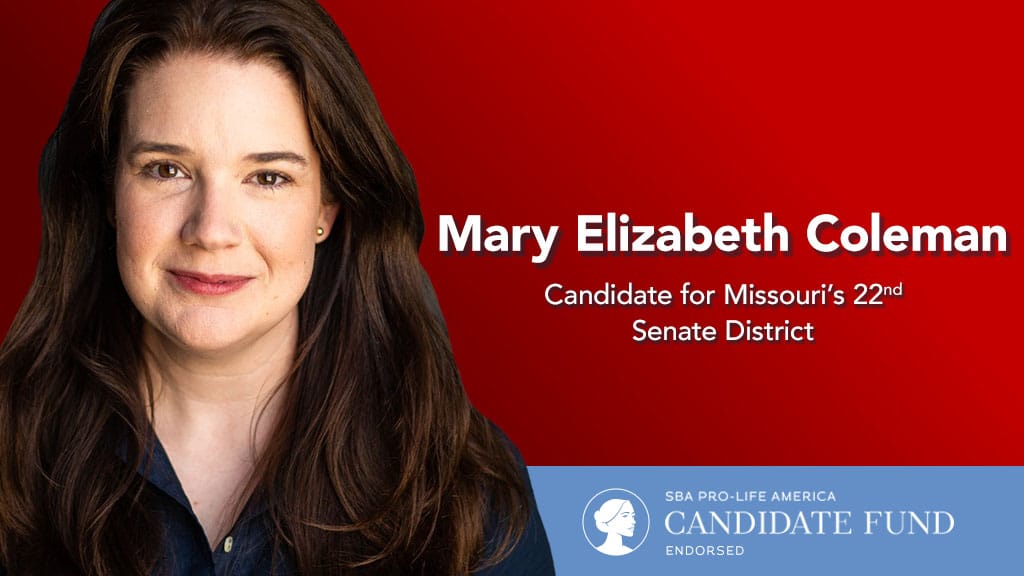 “Mary Elizabeth Coleman is at the forefront of the fight for unborn children and their mothers in Missouri and we’re proud to stand with her in her state Senate race,” said Hon. Marilyn Musgrave, SBA Pro-Life America’s vice president of government affairs. “An active member of our National Pro-Life Caucus, Mary Elizabeth is leading the charge to enact some of the nation’s strongest pro-life protections, including protecting unborn children from the moment their heartbeat can be detected. An adoptive mom herself, she has worked to expand assistance for adoptive families and many other initiatives to strengthen care for Missouri’s most vulnerable children – born and unborn. With countless lives at stake in the Dobbs case, pro-life, pro-woman champions like Mary Elizabeth are needed more than ever and we urge Missourians to support her in the August 2 primary.”

Coleman has served in the Missouri House of Representatives since 2019, representing the 97th District, and is chair of the Children and Families Committee. This session she has introduced the Empower Women, Promote Life Act to stop abortions on babies with beating hearts, as well as sponsoring legislation to protect babies who survive abortions and to extend child support to unborn children. She is a co-sponsor of the Protect Children First joint resolution, a proposed constitutional amendment to clarify that there is no “right” to abortion in Missouri.

Raised in Georgetown, Texas, Coleman received a BSBA in management from Saint Louis University and her Juris Doctor degree from St. Mary’s University School of Law. She served on the Arnold City Council from 2013-2015. Coleman practices law at Thomas More Society, a national not-for-profit law firm dedicated to restoring respect in law for life, family, and religious liberty. She and her husband of 17 years, Christopher, have six children, two of whom are adopted.