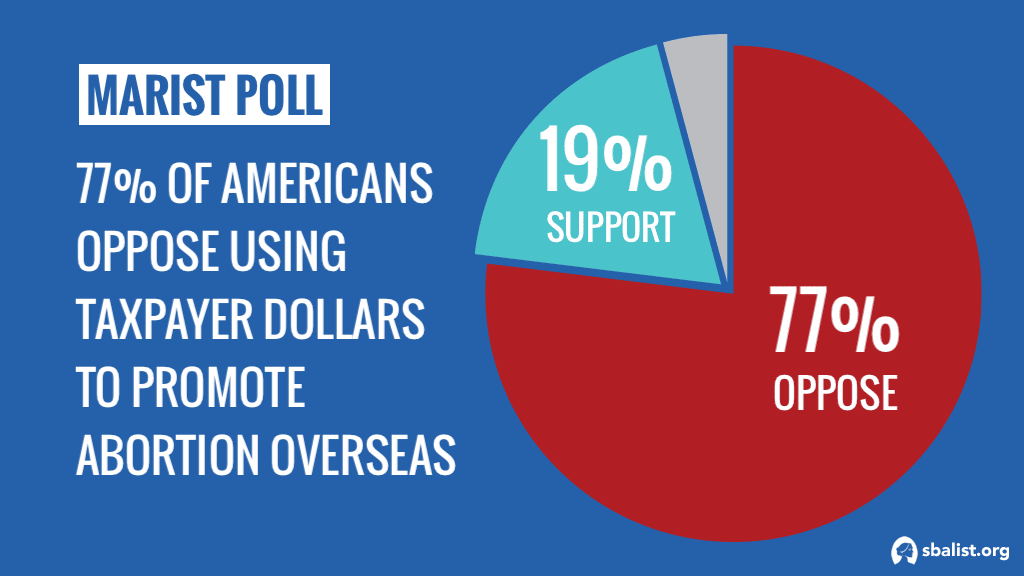 The Biden administration will also begin the process to overturn the Trump-Pence Administration’s Protect Life Rule, which protects taxpayers from being forced to fund abortion businesses through the Title X program.

A new Marist/Knights of Columbus poll finds that 77% of Americans – including 55% of Democrats, 85% of Independents, and nearly two thirds of pro-choice respondents – oppose using taxpayer dollars to promote abortion overseas.

In addition, a strong majority of Americans (58%) – including 65% of Independents and nearly one third of Democrats – oppose using taxpayer money to fund abortions in the United States.

“Funneling U.S. tax dollars to abortion groups overseas is an abhorrent practice that flies in the face of the ‘unity’ Joe Biden and Kamala Harris promised to inspire,” said SBA List President Marjorie Dannenfelser. “Rather than rally the nation around common ground policies to affirm and promote life, today they force taxpayers to bankroll abortion businesses overseas, opening up a slush fund for groups like Marie Stopes International and the International Planned Parenthood Federation. These abortion industry giants shamefully push their agenda on deeply pro-life nations and cultures. Americans across the political spectrum oppose the use of taxpayer funding to promote abortion and abortion businesses. Despite this, the new administration is moving forward with a payout to the abortion industry that backed their political campaign.”

The Global Protect Life policy did not reduce foreign aid by a dime, but rather made funds available to alternative organizations.