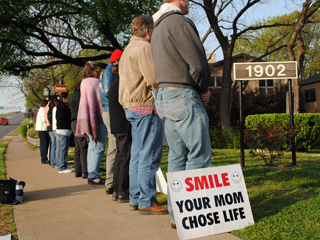 An infamous Illinois abortion clinic- notorious for hateful and vulgar signs in the windows as well as abuse of peaceful pro-life protesters- has been shut down. The Illinois Department of Public Health has suspended the operating license for the Northern Illinois Women’s Center due to the fact that its conditions were found to be “directly threatening to the public interest, health, safety, and welfare requiring immediate, emergency action.”

According to Melany Arnold, a spokeswoman for the Department of Health, the facility was inspected on June 6 and violations were observed of the Ambulatory Surgical Treatment Center Licensing Requirements Code and Illinois Administrative Procedure Act. The clinic did not meet the state’s requirement for a sanitary facility. When a follow-up inspection was conducted on September 15, the clinic was found to still be in violation and its license was suspended. The clinic is expected to respond to the state’s allegations within 20 days of receiving its notice of suspension.

The news that this particular abortion clinic has been closed down must bring a sense of joy and relief to the many pro-lifers who have protested, counseled, and prayed outside of it. Many have been taunted and mocked for years outside a clinic known for its bizarre and offensive public actions, including keeping a rubber chicken hung by its neck in the window, hanging taunting and insulting signs, and, on one occasion, having the proprietor of the clinic dress up like a devil. It is unsurprising that such uncontrolled malice and spite was mirrored by the filthy conditions of the clinic.

In these 40 Days for Life, let us follow the faithful example of the pro-lifers who were vigilant in their peaceful protest of the Northern Illinois Women’s Center despite. Some of them came and prayed there for years. Their faithful efforts have not been in vain. We should continue to ensure that there are always pro-life people at abortion clinics willing witness and support women and their unborn children. We must demonstrate that it is better to be outside with us than to be inside a clinic full of horror and sorrow such as that.