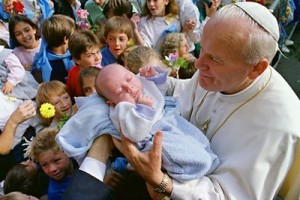 In the Theology of the Body, Pope John Paul II explains that when unions are “oriented towards love and life, they build families and, in turn, cultures that live the truth of love and life. When it is oriented against love and life, the sexual act breeds death – what John Paul II grimly, yet accurately, describes as a “culture of death” is a culture that, failing to recognize the infinite worth of every human person, chooses death as a “solution” to its problems.” Still confused about the connection between our choices and the culture of death? In his explanation, Christopher West says “Asks yourself: Why do we kill approximately 4,000 unborn babies every day in the United States alone? Because we are misusing and abusing God’s great gift. Make no mistake: in the final analysis, the abortion debate is not about when life begins [it begins at the moment of conception and ends at natural death]. It is about the meaning of sex. What most men and women who fight for abortion want is not so much the “right” to kill their offspring, but the “right” to have unrestricted sex without consequences.” Consequences which are a violation of the trust God has in each of us, especially women. God entrusts women with the ability to be mothers in both the spiritual and physical sense. Joyce Little explains this as “a violation of trust, indeed of the most basic trust, whereby God the Father entrusts to the care and protection of a mother every child he creates.” “Concern for the child, even before birth, from the moment of conception and then throughout the years of infancy and youth, is the primary and fundamental test of the relationship of one human being to another.” This fundamental relationship between mother and child is the very reason women will lead the Pro-Life movement! Women like Jane Norton and Sharron Angle who are protecting the innocent unborn babies of our world by standing up for their femininity, dignity, and mission in life.

In his encyclical Evangelium Viate (The Gospel of Life) John Paul II writes “It is an illusion to think we can build a true culture of life if we do not…accept and experience sexuality and love and the whole of life according to their true meaning and their close interconnection” (EV 97) He then discuses the importance of respecting the meaning and dignity of human life – a logic which does not necessarily “bode well” with all of our popular culture. This is why John Paul II urges the 21st century to be the century that takes on the task of building a culture of life and opposing the culture of death.  LOVE LET’S LIVE!