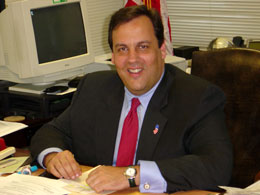 Part of Gov. Chris Christie’s belt-tightening plan for New Jersey was the termination of $7.5 million in public funding for Planned Parenthood clinics in the state, a decision Democrats in the legislature countermanded with a bill that cleared the Senate with a 30-10 vote — sufficient to override a veto. But when that veto came and the Democrats scheduled an override vote, Republicans in the legislature backed down, and the measure failed 23-17.

Now, Planned Parenthood facilities in the state are shuttering their doors:

After the New Jersey state Senate defeated an attempt to override the decision of Gov. Chris Christie to cut off state taxpayer funding of Planned Parenthood abortion businesses, the first facility run by the national abortion giant is closing.

PP-SNJ stands to lose as much as $160,000 in taxpayer funds because of Christie’s decision and the upholding of his veto. With the closing of the Cherry Hill center, Planned Parenthood customers seeking abortions or other “services” must go to PP centers in Camden, Bellmawr, and Edgewater Park.

This is great news for a state where, according to the Guttmacher Institute, more than half of all teenage pregnancies end in abortion.