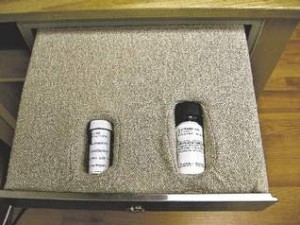 *photo from The De Moines Register

“A person is a person no matter how small”… and an abortion is an abortion regardless of the method used. The May 16, 2010 De Moines Register released an article by Tony Leys titled “Faraway doctors give abortion pills by video” – and the name explains it all!

“Small Planned Parenthood clinics around Iowa are using a remote-control pill-dispensing system to make abortions available in areas where few doctors offer them. The first-in-the-nation system allows a Planned Parenthood physician from Des Moines to visit with each patient by videoconference, then press a computer button to open a drawer in front of the patient, who could be seated up to 190 miles away. The patient then reaches into the drawer and withdraws the abortion pills… The abortion process in question involves two medications, both of which cause women to miscarry. The first is Mifeprex, a brand name for a pill also known by its chemical name, RU-486. The second drug is misoprostol, which women take at home after taking Mifeprex in the clinic.”

While Planned Parenthood claims that the process is legal, Operation Rescue (a national pro-life group) has filed a complaint with the state medical board. Operation Rescue stated that “The ‘telemed abortions’ are being done without a licensed physician ever personally seeing or examining the patient” which is “apparently illegal and certainly dangerous.” “Operation Rescue said in its complaint that the failure rate of the medications can be up to 20 percent, and that continued pregnancies can lead to deformed fetuses and deadly infections. The group also contends that at least 13 women have died because of the drugs and that more than 1,100 have suffered serious complications.” The Des Moines Register claims that Operation Rescue “asks the state board to revoke the medical license of Dr. Susan Haskell, the Planned Parenthood chapter’s medical director.” A babies life is literally taken away in a matter of minutes and without a doctor present, a true injustice to all, and one of the many dark realities of Planned Parenthood.