Washington, D.C.  – South Dakota has become the 16th state to limit abortion after five months – more than halfway through pregnancy – because of the unborn child’s ability to feel pain. South Dakota State Senator Jenna Haggar, a member of the Susan B. Anthony List’s National Pro-life Women’s Caucus, was a lead author of the bill which passed Monday and was signed by Governor Dennis Daugaard late Thursday.

This is the latest victory amidst a flurry of state-level pro-life activity being led by women legislators. 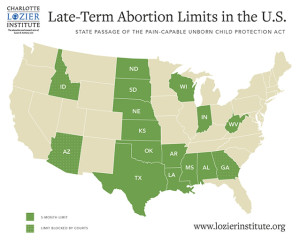 “We thank Governor Daugaard, State Senator Haggar, and the other pro-life state legislators and coalition groups who worked so hard to pass this compassionate, human-centered legislation.

“South Dakota’s victory, which is likely to be followed next week by South Carolina, is evidence of sustained momentum to pass this bill on the federal level. A nationwide limit would save up to 18,000 unborn lives a year and protect that many women. The federal legislation has passed the U.S. House twice, received majority bipartisan support in its first ever vote in the Senate, and has the support of the majority of Americans, women in even higher numbers than men. This consensus stand is not only morally just, it is smart politics.”

South Carolina State Reps. Wendy Nanney and Donna Hicks are leading the effort to pass similar legislation in the Palmetto state. The bill awaits a vote in the House of Representatives, where it is expected to pass easily before going to Governor Nikki Haley’s desk.

The Susan B. Anthony List and its Political Action Committees, the SBA List Candidate Fund and Women Speak Out PAC, spent $16.71 million in the 2014 election cycle to defeat pro-abortion incumbents and elect pro-life candidates to federal and statewide office. The SBA List is dedicated to pursuing policies and electing candidates who will reduce and ultimately end abortion. To that end, the SBA List emphasizes the education, promotion, mobilization, and election of pro-life women.  The SBA List is a network of more than 465,000 pro-life Americans nationwide.