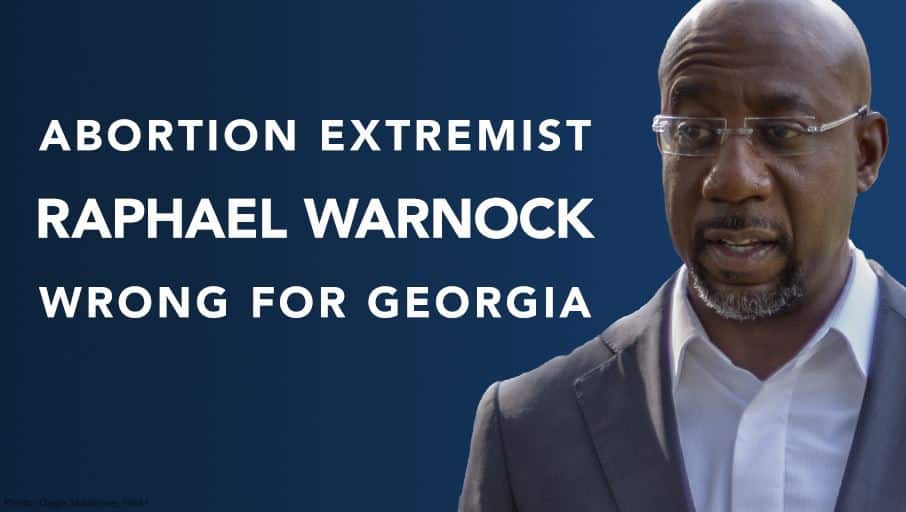 Washington, D.C. – At a rally in Atlanta this week, U.S. Senator Raphael Warnock (D-GA) – a self-described “pro-choice” pastor – claimed to “have a profound reverence for life” while at the same time suggesting “even God” approves of abortion on demand, for any reason up until birth.

Warnock is an original co-sponsor of the deceptively named “Women’s Health Protection Act,” legislation that would force all 50 states to allow abortion without limits by wiping away nearly all state level limits on abortion, even protections for babies and women late in pregnancy. He has an F on SBA Pro-Life America’s National Pro-Life Scorecard.

“Senator Raphael Warnock strenuously opposes any limits whatsoever on abortion – including brutal late-term abortions up to the moment of birth and even infanticide. Georgians are deeply disturbed by Warnock’s shameless push to strip human rights from the most vulnerable and defenseless among us, the unborn,” said SBA Pro-Life America President Marjorie Dannenfelser. “Pro-abortion Democrats like Warnock, Stacey Abrams will go to any lengths to promote abortion on demand nationwide, whether it is cloaking their radical agenda in the guise of religion or pushing outright misinformation denying basic scientific facts – for example, that unborn children have beating hearts by six weeks and can feel pain at least by 15 weeks.

“Warnock and Abrams, along with Democrat candidates across the country like John Fetterman, Tim Ryan, Catherine Cortez Masto, Mark Kelly, and many others, stand in lock step with the abortion lobby in refusing to name a single commonsense protection for unborn children and their mothers they would support. In key battleground states like Georgia, our ground team talks with thousands of voters at their doors every day. When voters are informed about the Democrats’ pro-abortion extremism, they reject it.”

What Georgia voters are saying:

“A voter told Lew that she and her husband are ‘absolutely pro-life.’ They voted for Warnock in the last election thinking that since he is a pastor, he must be pro-life. They were shocked to hear that he is pro-abortion and thanked Lew for telling them.”

“I just talked to this guy who was uninformed about Raphael Warnock’s radical abortion views because he is a pastor. He was very concerned and said he would look into it.”

“One man was very surprised to hear about Sen. Warnock’s positions on abortion and infanticide since Warnock is a preacher. Specifically, the guy I was talking to said, ‘I thought he was a religious man.’”

The SBA Pro-Life America and WSO PAC field team has boots on the ground in Georgia and has made over 307,000 visits to voters to discuss Warnock’s and Abrams’ record on life. This election cycle, SBA Pro-Life America and its affiliated entities plan to spend $78 million to protect life across America. This includes reaching eight million voters across battleground states – four million directly at their doors – to educate them on key issues and win pro-life majorities in the U.S. House and Senate.