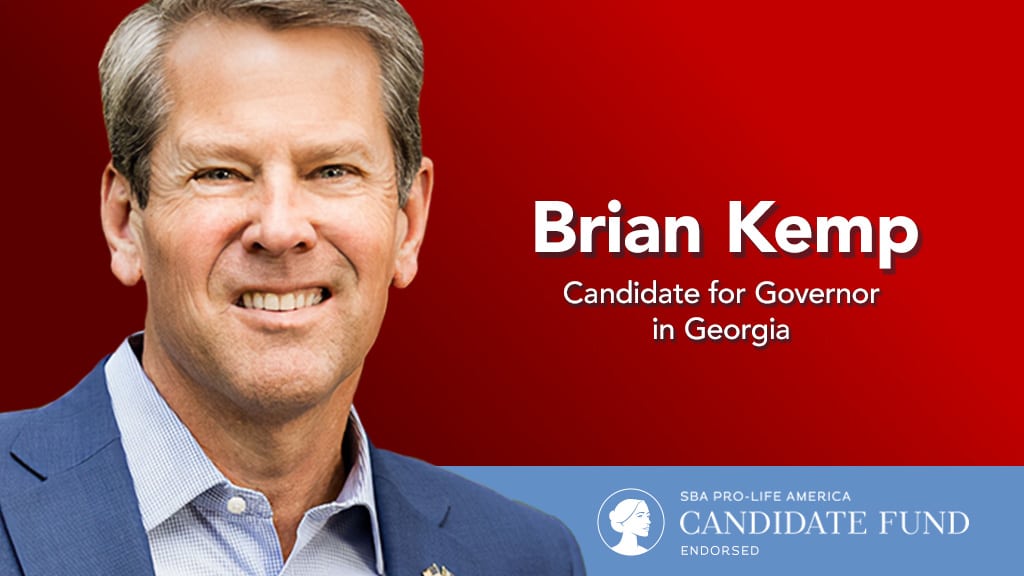 Washington, D.C. – Today SBA Pro-Life America Candidate Fund announced its endorsement of Gov. Brian Kemp (R-GA) for re-election and slammed his opponent, Democrat Stacey Abrams, for misleading voters about her support for abortion on demand until birth – as evidenced by the undefined “health” exception she cites.

“Governor Brian Kemp courageously stands up to pro-abortion bullies, inspiring leaders around the country,” said SBA Pro-Life America President Marjorie Dannenfelser. “Swiftly after taking office, Kemp signed a strong new law protecting unborn babies from the moment their heartbeat is detected. Don’t buy Stacey Abrams’ verbal smokescreens – she supports painful late-term abortions up to the moment of birth. Our ground team has visited the homes of more than 233,000 Georgia voters to expose the extremism of Democrats like Abrams and elect champions like Governor Kemp.”

Kemp was elected in 2018 as Georgia’s 83rd governor. In 2019 he signed Georgia’s Heartbeat Law, enacting some of the nation’s strongest protections for unborn children and their mothers. Kemp was one of 12 governors to sign a pro-life amicus brief in Dobbs v. Jackson Women’s Health Organization, in which the Supreme Court will assess whether pre-viability limits on abortion are constitutional.

Previously Kemp was elected twice as Georgia’s Secretary of State, served in the state Senate, and was a successful businessman with companies in real estate development, construction, manufacturing, farming, and agri-business. He and his wife Marty have three daughters and are members of Emmanuel Episcopal Church.

SBA Pro-Life America is a network of 900,000 pro-life Americans nationwide, dedicated to ending abortion by electing national leaders and advocating for laws that save lives, with a special calling to promote pro-life women leaders.