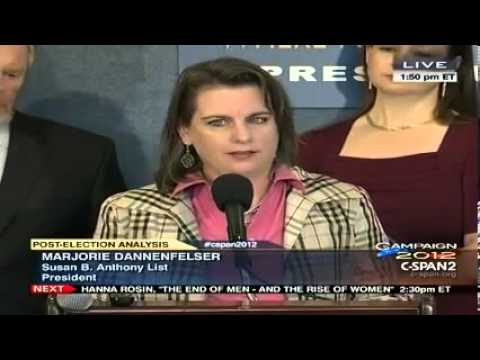 “The SBA List and our pro-life mission certainly had some bright spots last night with the election of a 2nd prolife woman in the Senate, Deb Fischer, as well as the retaining of Michele Bachmann, who was heavily targeted by the left, and the return of Steve King.

Those were three bright spots but overall not a great night movement for the pro-life movement, despite our growing power in the country among women, among almost every demographic.

The gap between public opinion and electoral office was not closed, again.

Yesterday’s election results are an invitation to the Republican Party to return to fundamentals. What are the fundamentals of a winning Republican strategy? They are what Ronald Regan called the three legs of the policy stool — social policy, economic policy, and foreign policy — fully embracing each one of those.

What we had instead was one wobbly leg with about a billion dollars behind it on the Republican side, from the top of the ticket and then affecting every other senate race in the country because of that influence.

When fully engaged, each of those policies area, a real mandate is created and there is a resonance on the grassroots level that brings public policy leaders into office so that those three areas can be implemented.

Without fully engaging in each of those areas — and of course, on social policy — we leave votes on the table every single time.

What we had unfortunately was a de facto truce on social issues on one side, but a full embrace of the war on social issues on the other side. Republicans had the truce, Obama had launched a war over abortion and on the Life issue, therefore he got to completely define what that issue was — and what is it? Rape. Abortion meant rape in the minds of many voters because the debate was not fully engaged.

The President’s weaknesses — his extreme positions on late term abortions, on sex-selective abortions, on not saving children born even after a failed abortion — none of these weaknesses were exploited in any debate. Even the lies he put forth during the debates went unaddressed.

Voters overwhelmingly disagree with the extreme positions on abortion taken by President Obama and the Democratic Party.  Moving forward, the Republican Party and its candidates must expose and exploit those vulnerabilities, or risk alienating the tremendous and growing pro-life base that year after year, election after election, has delivered a winning increment.

War on Women — was that theme effective? Did it actually move women voters? Well, if you look at the data over time you have to say no. The gender gap that actually benefited Obama last election, actually decreased this election. After that launch of the “War on Women” theme, at the top of mind at every single debate, in fact clearly did not stick. The women’s vote was very fluid. They were completely underestimated, and in fact completely underestimated, in what women care about and what our positions actually are.

Has the pro-life issue in any way been repudiated? Well, absolutely not. I’ve been asked that question already three times this morning.

You cannot win a war which is not engaged. Your issue cannot be repudiated if no one has ever heard it. And that is exactly what happened on the national level and that is exactly why so many votes were left on the table that should not have been, this cannot happen again.

At the Susan B. Anthony List we are going to relook at how we endorse and train candidates.

From now on they will not be sent into the field with our support without knowing how to actually discuss the issue with compassion and love and to exploit the other candidate’s extremes. We’re going back to the drawing board on that and next time, out of the box, we’ll see a new set of candidates, especially if they follow the advice of the rest of the folks here.

I want to make one other point and that is on social issues. Are they the big burden on Republicans back? Well, if you look at every state that had a statewide across the country that also had ballot initiatives, in every single state but one, the ballot initiative ran ahead — ran better — than the losing Republican candidate. That’s just data. So I thank you very much I look forward to questions.”