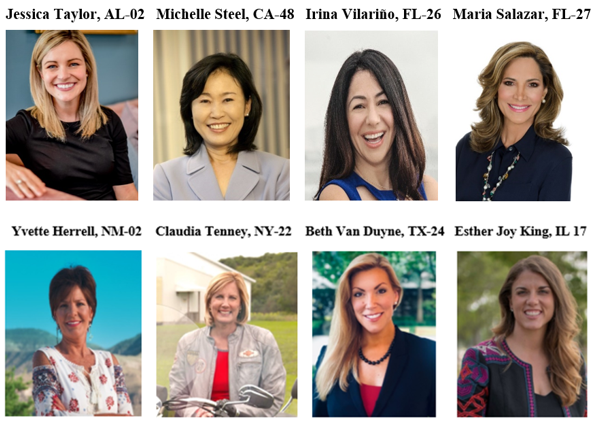 “We are proud to endorse these eight exceptional pro-life women candidates,” said Marilyn Musgrave, SBA List Vice President of Government Affairs. “With a special calling to promote women who will protect the unborn, SBA List stands behind this first group of endorsed candidates. Some have already shown pro-life leadership in the legislature such as Yvette Herrell in the NM state legislature and Claudia Tenney in the NY Assembly & the U.S. Congress. Two of our endorsed women are first generation Cuban-Americans, who know firsthand what devaluing life can do to a country. Others have served as local entrepreneurs and government officials who have already served their constituents in countless ways. We are confident that all of these women will provide invaluable perspectives and strong leadership to protect unborn life, and we look forward to seeing them in Washington.”

Jessica Taylor (AL-02) hopes to succeed pro-life powerhouse Congresswoman Martha Roby. An Alabama native, former president of a pregnancy center, and mom-of-3, Jessica made a splash when she announced her run for Congress, promising to protect life. Her husband recently served as general counsel to Governor Kay Ivey, one of America’s most pro-life governors.

Michelle Steel (CA-48) is a first generation Korean-American who has helped run her family’s small businesses since she was very young. She is 100% pro-life and passionately dedicated to her Christian faith. Michelle and her husband Shawn have two children.

Irina Vilariño (FL-26) is a single mother who runs her family’s restaurant and real-estate investments. She moved to southern Florida in the 1980’s from Cuba, where you can get an abortion as easily as you can take pain-killers. In light of that, she is committed promoting the dignity of life as the core value on which all other values rest.

Maria Salazar (FL-27) has worked as an award-winning journalist and TV broadcaster for CNN, Telemundo, and Univision. She understands that life is a core issue to Hispanic-American voters, and is dedicated to protecting the unborn in her district. She lives in Miami with her two daughters.

Yvette Herrell (NM-02) is a proven leader on life. As a member of SBA List’s National Pro-Life Women’s Caucus, she has co-sponsored several pro-life bills as well as introduced pain-capable legislation that would ban late-term abortions. She is a native New Mexican and member of Christ Community Church.

Claudia Tenney (NY-22) has been previously endorsed by SBA List, and is a consistent pro-life leader. A former member of our Pro-Life Women’s Caucus, she maintained a solid pro-life voting record throughout her time in Congress and the NY Assembly.

Beth Van Duyne (TX-24) was the first woman to serve as Councilwoman and Mayor of Irving, TX. A mom-of-two, Beth has spoken out publicly against abortion and taxpayer funding of Planned Parenthood. The Democrat opponent in this race was recently endorsed by EMILY’s List.

Esther Joy King (IL-17) has served as a missionary and aid worker in Mexico and Afghanistan. She earned her law degree from Northwestern, and went on to join the JAG Corps in the U.S. Army reserve. She is vocal about her belief that life begins at conception, and she is committed to challenging Cheri Bustos on her 100% pro-choice record.