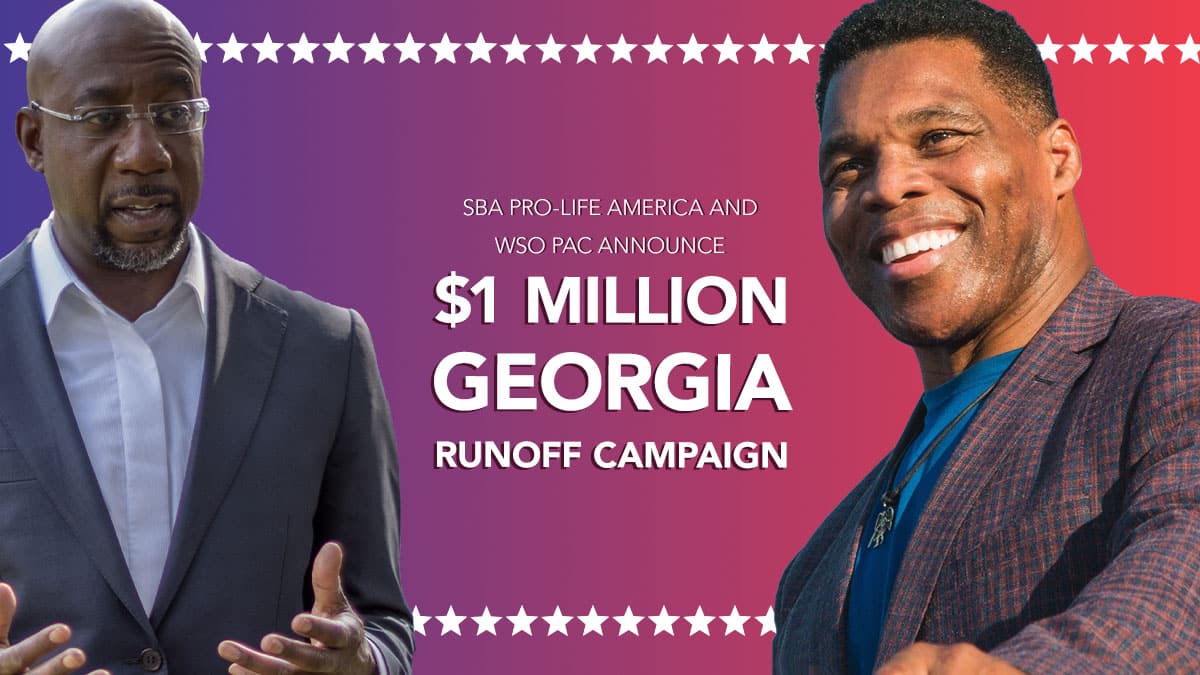 Washington, D.C. – In response to the news that Georgia’s U.S. Senate race between Herschel Walker (R) and U.S. Senator Raphael Warnock (D) will go to a runoff, Susan B. Anthony Pro-Life America and its partner Women Speak Out PAC announced that they will spend at least $1 million in the runoff, and their ground team will continue its outreach to Georgia voters to contrast Walker’s pro-life position to Raphael Warnock’s pro-abortion extremism.

“Our field team has visited over 456,000 homes in Georgia to expose Raphael Warnock’s pro-abortion extremism and support Herschel Walker. We are proud to back Herschel and will work tirelessly to secure his victory in the runoff,” said SBA Pro-Life America President Marjorie Dannenfelser. “Walker’s support for compassionate limits on abortion aligns with the people of Georgia and the overwhelming majority of Americans, in stark contrast to ‘activist pastor’ Warnock’s radical position of abortion on demand until birth, paid for by taxpayers. Our ground team will continue to visit voters at their homes to expose Warnock’s extremism and urge them to elect Walker as their champion in the U.S. Senate.”

Warnock was a lead co-sponsor of the deceptively named “Women’s Health Protection Act,” legislation that would mandate abortion on demand until birth in all 50 states. Walker backs a federal minimum limit on abortion after 15 weeks, a point when unborn children can feel pain, and repeatedly called out Warnock’s pro-abortion extremism on the debate stage.

Nationally, SBA Pro-Life America and its entities reached over eight million voters across battleground states – close to four million directly at their doors – to expose the Democrats’ pro-abortion extremism and win a pro-life majority in the U.S. House and Senate.